The CBK marked the International Money Week, in the light of financial education

The Central Bank of the Republic of Kosovo has marked the Global Money Week for the sixth consecutive year.

On this occasion, the CBK’s Governor, Fehmi Mehmeti stated that the Global Money Week this year is of particular importance, since the CBK has placed the Republic of Kosovo at the attention on the international arena, whereby activities that will be conducted can be followed by other Central Banks, Regulators and International Organizations in the field of financial education, via the “live stream” broadcasting.

Governor Mehmeti stated that 2019 will be the year of consumer protection.

“In today's environment, when we all witness the financial sustainability of Kosovo, placing Kosovo’s financial system at comparable levels, not only with the countries of the region but also with countries of the European Union, the issue of financial education has played a crucial role on our development agenda. Moreover, considering that the financial services sector plays an important role in economic growth, job creation, building of a vital infrastructure and sustainable development of Kosovo. The financial sector’s services and products affect the life of each of Kosovo’s citizen. Therefore, we are grateful to all of our collaborators for the support they have provided to the Central Bank and other relevant institutions, in building a financial market that treats consumers fairly, encourages financial inclusion, and helps citizens to effectively use financial services ", stated Mehmeti.

Governor Mehmeti said that one of the CBK’s strategic goals is to promote the development of the sound financial system in the Republic of Kosovo and to further develop the function of financial education, in order to create a sound financial culture that helps all stakeholders make the right decisions based on sufficient knowledge.
During this event, the CBK's Governor Fehmi Mehmeti, and the Minister of Education, Science and Technology, Shyqiri Bytyqi, signed a Memorandum of Understanding based on which the CBK will distribute financial education materials to all Kosovo schools, whereby Kosovo students will have the chance to get acquainted with educational economic-financial concepts, which is important to be installed in early education.

Also, Governor Mehmeti has stated that the Central Bank of the Republic of Kosovo is developing the financial education in the function of the three main dimensions: the function of financial stability, consumer protection and financial inclusion.

“With the support of the European Fund for Southeast Europe "EFSE", we will implement the project "Improving the banking market transparency, by building the platform for comparing interest rates of banks". This platform will allow citizens to make decisions based on complete and clear information, disclosed on a unified platform for all banks. This platform will also help increase the sound competition within the banking sector. With the support of the World Bank and the Switzerland's State Secretariat for Economic Affairs (SECO), we have succeeded in designing the "Greenback Project" targeting remittances as a very important category of revenues in Kosovo, increasing awareness of senders and recipients, so that the destination of this revenue’s category can be transformed from consumption to investment. Also, the "Remittance and Payments Program” will help the CBK to further advance the payment system infrastructure, particularly in terms of a broader extension and more favourable costs for small payments" stated Governor Mehmeti.

Minister Bytyqi expressed his gratitude to CBK for the initiative, and the commitment of the MEST to further continue the cooperation.

Mr. Marco Mantovanelli, Country Manager for Kosovo and North Macedonia, in the Europe and Central Asia Region of the World Bank, stated that the regional Remittances and Payments Program launched with the CBK, and funded by SECO, will bring legal reforms, increase financial awareness, and efficiency in the use of remittances.

Patrick Etienne, Country Director in Kosovo of the State Secretariat for Economic Affairs (SECO), expressed his appreciation for the support of the financial education program, and CBK in general, by highlighting the importance of projects implemented in cooperation with CBK.

Governor Mehmeti, together with Minister Bytyqi, awarded the prizes for the winners of the contest "Learn, Save, Earn". 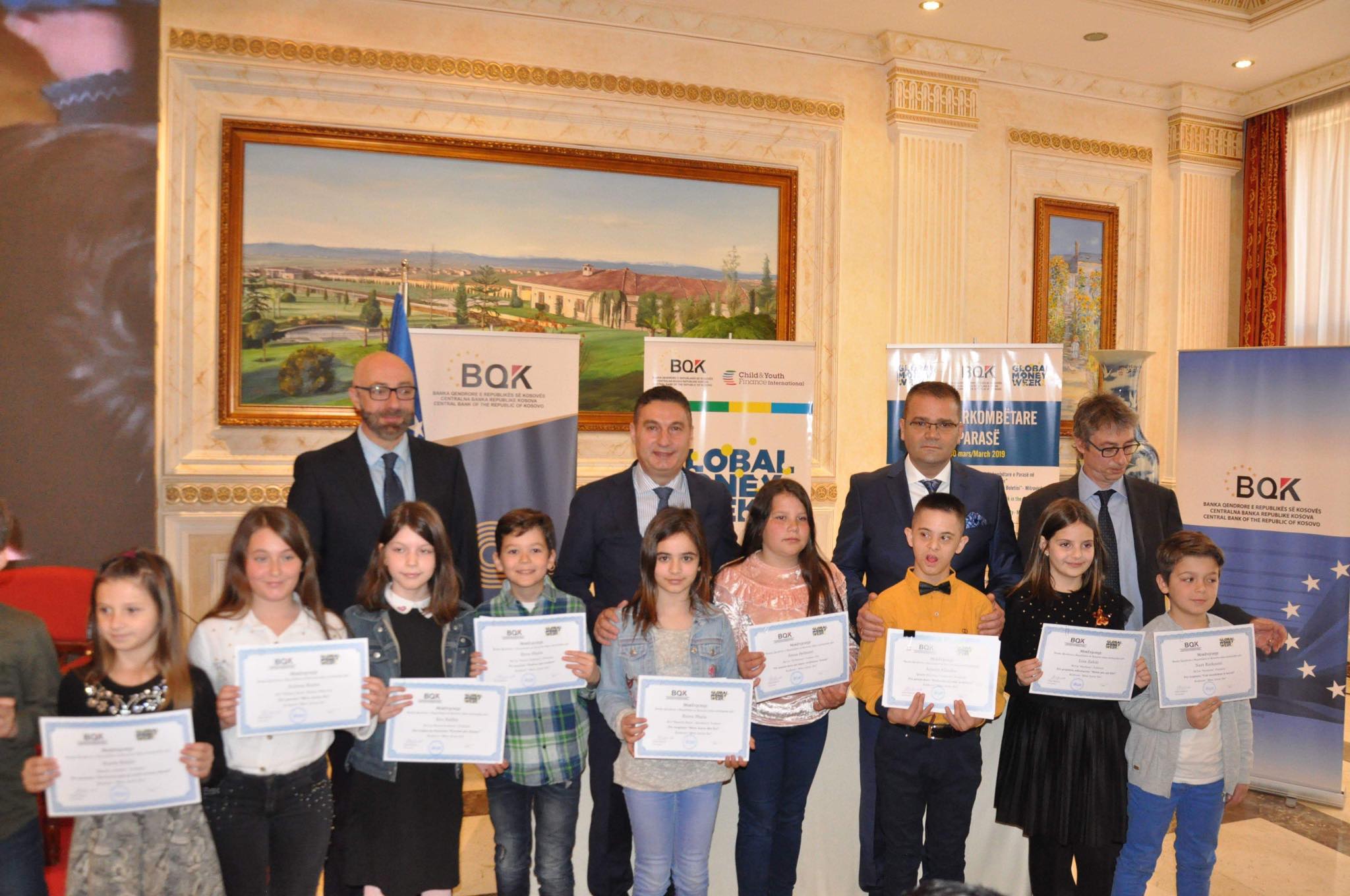