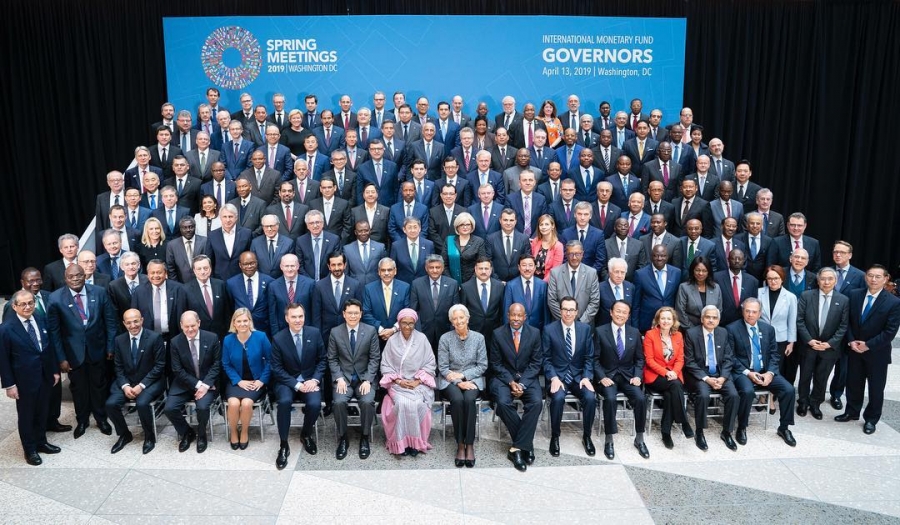 The CBK delegation, led by CBK Governor Fehmi Mehmeti, has concluded its participation in the Spring Meetings of the International Monetary Fund and the World Bank, which took place in Washington DC from 9 to 13 April 2019.

On the last day of their stay, Governor Mehmeti attended the discussions of Central and Eastern Europe governors and ministers on the Regional Economic Outlook of Central and Eastern Europe.
Also, during the last day, representatives of CBK attended the plenary meeting of the IMF's International Monetary and Financial Committee.
During their stay in Washington and participation in plenary sessions organized by the IMF and the World Bank, the delegation of the Central Bank of the Republic of Kosovo, led by the Governor, met senior executives of the International Monetary Fund and of the World Bank, from whom they received support in fulfilling CBK objectives in support of the country's development.
In the IMF and WB annual meetings, the Governor of the Central Bank of Kosovo, Fehmi Mehmeti, attended the plenary session of the IMF and WB.
In addition to the meetings with the IMF mission team for Kosovo, Governor Mehmeti also met with Deputy Director of the International Monetary Fund, Tao Zhang, who briefed him on the overall developments in the financial system and thanked him for the continued support that the IMF has provided to the CBK over the years.
During this meeting, Deputy Director of the International Monetary Fund, Tao Zhang, confirmed the further support to the CBK and to Kosovo.
CBK delegation led by Governor Mehmeti met in separate meetings with Deputy Governor of the World Bank, Cyril Muller, and with the World Bank Director for Western Balkans, Linda Van Gelder, discussing recent developments in the financial system and projects related to World Bank technical assistance.
During the annual meetings, the Central Bank of the Republic of Kosovo received support from the IMF’s Department for Europe regarding the IMF's technical assistance to the CBK for implementing the projects and potential recommendations that will emerge from the Financial Stability Sector Review.
Meetings were also held with the new Director of our IMF Constituency, Raci Kaya, and with the Director of our World Bank Constituency, Guenther Schoenleitner.
In the framework of annual meetings in Washington, the CBK delegation participated in the opening meeting of the IMF's International Monetary and Financial Committee as well as in the separate meetings of the Constituency of the World Bank and International Monetary Fund, part of which is also Kosovo.
The annual meetings of the Boards of Governors of the International Monetary Fund (IMF) and World Bank Group (WBG) bring together, every year, bankers of the central banks, ministers of finance, executives of private sector, representatives of civil society organizations and academics, to discuss finance issues focused on the global economy, international development and the global financial system.