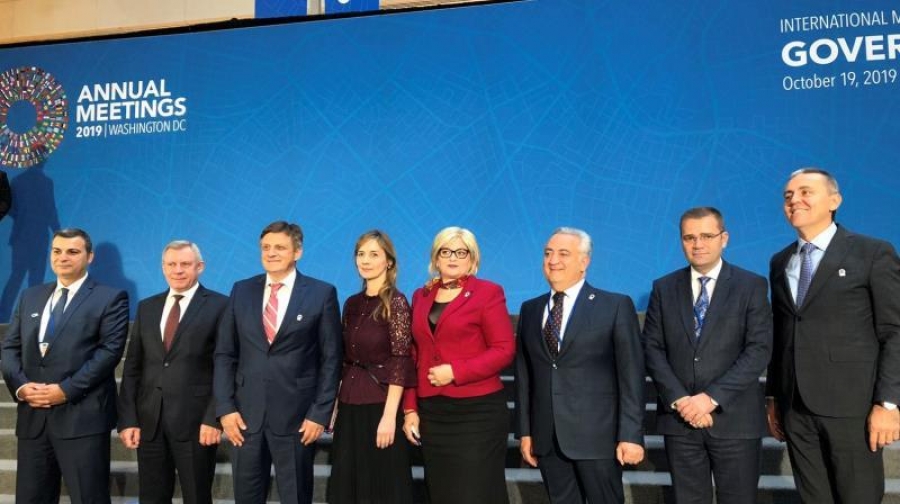 The delegation of the Central Bank of the Republic of Kosovo, led by the Governor Mr. Fehmi Mehmeti, has concluded its participation in the annual meetings of the International Monetary Fund and the World Bank, which were held in Washington, USA, from 14-20 October, 2019.

At the annual meetings, the CBK delegation met with representatives of the US Treasury, the International Monetary Fund, the World Bank and other institutions.

Governor Mehmeti met with Mr. William C. Thomas of the US Treasury, who briefed him on the latest developments in the financial sector and financial health indicators.

While, Mr. Thomas congratulated Governor Mehmeti on the achievements in the financial sector and confirmed further support for the CBK by the US Treasury.

In the framework of the annual meetings, Governor Mehmeti met as well with the Deputy Managing Director of the IMF, Mr. Tao Zhang, with whom they discussed about recent macroeconomic developments in Kosovo, with particular emphasis on sustainability and developments in the financial sector.

On this occasion, Governor Mehmeti thanked the International Monetary Fund for the continued support it has been given to Kosovo and the CBK in particular, and at the same time thanked Mr. Zhang on the IMF's willingness to contribute to the 20th Anniversary Conference of the CBK establishment, to be held in November this year.

Governor Mehmeti also met with the Director of the IMF's European Department, Mr. Poul Thomsen, with whom were discussed recent macroeconomic developments, developments in the financial system, as well as strategic and development challenges and objectives, including Kosovo's  co-operation with IMF.

The Governor also met with the IMF Mission Team for Kosovo, led by the new Head of Mission, Mr. Gabriel Di Bella, in which case the Governor briefed Mr. Di Bella on the latest developments in the financial sector, including financial health indicators.

Governor Mehmeti thanked the IMF representative for the Financial Stability Sector Review report, expressing the CBK's commitment to implementing the recommendations coming out from this report.

Governor Mehmeti also held separate meetings with the Director of our IMF Constituency, Mr. Raci Kaya, as well as with Mr.Paul Methieu from the IMF Department of Monetary Policy and Capital Markets, where the topic of discussion was the IMF assessment under the program: "Financial System Stability Review" and consequently provision of Technical Assistance to the CBK, while in a meeting with World Bank representative Mr. Mario Guadamillas was discussed about technical assistances for the Payment System and the Financial Gap, as well as other CBK development projects.

In the meetings held with the World Bank Vice President, Mr. Cyril Muller and the World Bank Director for the Western Balkans, Ms. Linda Van Gelder, the topics of discussion were the latest macroeconomic developments in Kosovo, the Development Policy Loan (DPL), as well as the ongoing projects related to the evaluation of the Payment System and the financial gap.

Governor Mehmeti thanked the World Bank for its continuous support it has been provided to the CBK, in developing many important projects for the financial system in Kosovo

At the same time, Governor Mehmeti informed Mr. Muller regarding the latest developments in the financial sector and as well thanked the World Bank for its willingness to contribute to the 20th Anniversary Conference of the CBK establishment, to be held in November this year.

Also, during the last day, CBK representatives participated in the plenary meetings of the IMF’s International Monetary and Financial Committee, as well as in the discussion of the Governors and Ministers of Central and Eastern Europe regarding the IMF's economic forecasts for region.

The annual meetings of the Boards of Governors of the International Monetary Fund   and World Bank Group , bring together bankers of the central banks, ministers of finance, executives of private sector, representatives of civil society organizations and academics, to discuss finance issues focused on the global economy, international development and the global financial system.