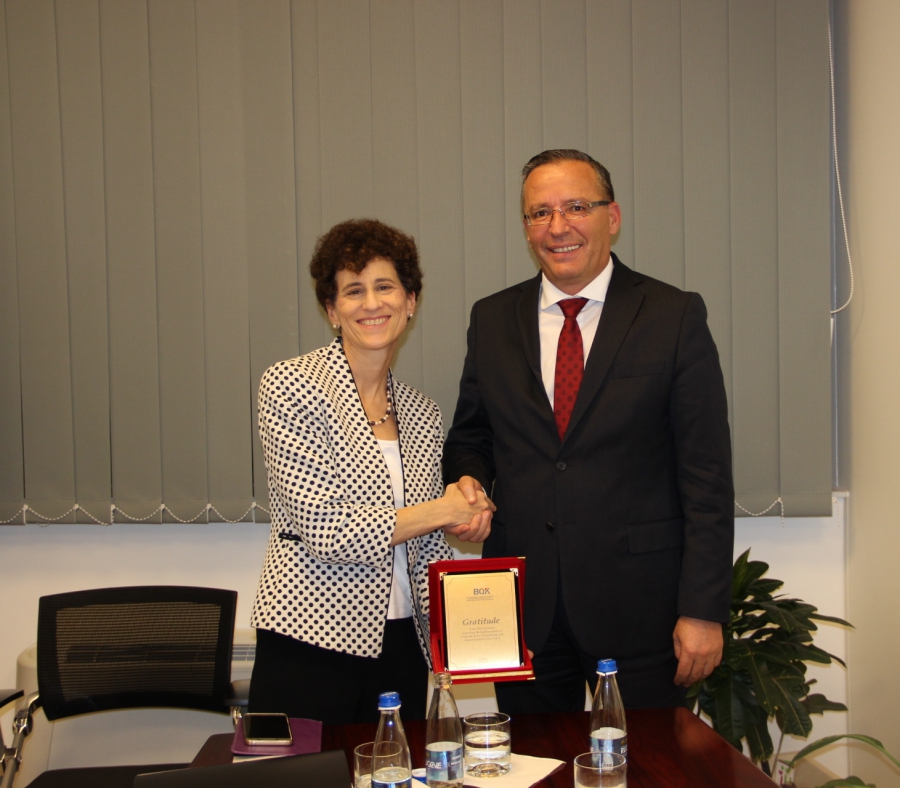 The Governor Hamza hosted today in a meeting Ms. Ellen Goldstein, World Bank Country Director and Mr. Marco Mantovanelli, World Bank Country Manager for Kosovo. The Governor, initially welcomed Ms. Goldstein and informed her about today's ceremony held on the occasion of the inauguration of the Business Continuity Centre and thanked her for the unreserved support for building of this center of special importance. The Governor has also informed Ms. Goldstein on the current situation in the country's financial sector, which is estimated as sound and stable.

Governor Hamza, and Ms. Ellen Goldstein exchanged information on actual economic and financial developments in Kosovo, and discussed the ongoing multidimensional support of the World Bank to the economic and institutional development of the Republic of Kosovo.
Ms. Ellen Goldstein, assured the Governor Hamza, that the World Bank will continue its support to all areas which are of interest for the development of the CBK and financial sector in general. On this occasion, Ms. Goldstein highly valued the cooperation with the Central Bank as well as the achievements in the projects that are supported by the technical assistance of the World Bank. She emphasized that the success of projects developed in Kosovo are being taken as a model to design project for other countries and congratulated the Governor for the work being done in developing the CBK capacities.
At the end, Governor Hamza and Ms. Goldstein expressed the CBK and the World Bank commitment that the completion of the Business Continuity Centre project will not conclude their cooperation that will further expand in other areas, in future projects. For her contribution in Business Continuity Centre project and the ongoing support of the World Bank, Governor Hamza awarded a recognition to Ms. Ellen Goldstein.