The traditional annual conference of Bank of Albania has concluded 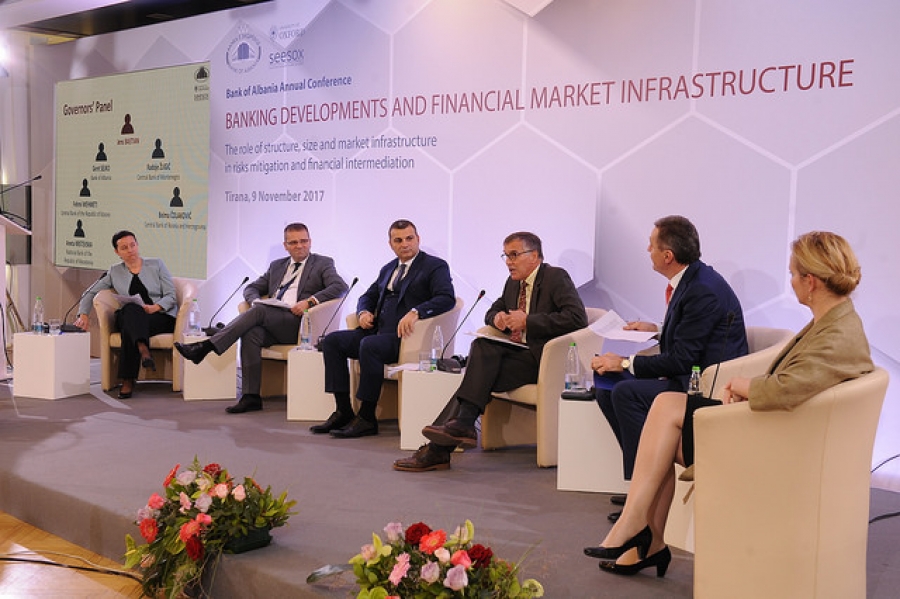 The traditional annual conference of Bank of Albania, co-organized with the University of Oxford, namely St. Anthony College, has concluded.
During the conference, it was concluded that monetary policy finds support in other financial instruments. In this way, it can benefit from the further development of financial institutions, as this development along with the use of financial instruments has a direct impact on the transmission of monetary policy effects. According to Conference panelists, this means that the monetary policy and the development of financial markets are very important for the progress and further stimulation of the economy, as well as for the continuation of current reforms and policies.
The participants also noted that the EU accession remains an important anchor for all the countries in the region. However, the advancement of reforms, of domestic policies and of domestic institutions should remain a constant priority. On the other hand, according to debaters, these countries should work intensively in order to reduce the macroeconomic and financial uncertainties, deepen the banking sector, develop capital markets and diversify investment portfolios.
Deepening and further expanding the financial market in other segments, as well as enhancing financial education were some of the important conclusions, which were emphasized during the conference. These measures would improve the efficiency of the central bank policies, protect investors, reduce risks, and ensure greater macroeconomic and financial sustainability.
During the conference it was noted that after the recent financial crisis, financial shocks have major effects not only on the banking system but also on the real sector and the well-being of the country as a whole. Participants discussed that the price stability is an indispensable condition, but not sufficient to ensure financial stability. On the other hand, macro-prudential policies alone cannot ensure the country’s financial stability. Consequently, identification of financial shocks and co-ordination between monetary and financial policies is important, taking into consideration the mutual effect.
The conference conclusions underlined that although the advanced economies have shown that they have successfully solved some of their problems, they will be faced with other challenges in the future; challenges that are related not only to the banking system, but for some of them, also to the development of new capital markets.
In this context, regional cooperation between the countries and their institutions should be a priority for the South East European countries. This will contribute to strengthening institutional capacities, creating the necessary infrastructure and implementing macroeconomic policies more completely and effectively.
Participants also stressed the need for further increase of financial inclusion, financial education of the public as well as the need to implement the latest technological developments. This would enable the South East European countries to have more sophisticated financial systems.
This conference is also a testimony of the value of the cooperation between the institutions and the academia in the field of scientific research. This cooperation helps deepening the knowledge of policy-making institutions and supports their development.
These were the conclusions of the third session, the panel of Governors, which brought together in a special discussion table the Governor of the Bank of Albania, Mr. Gent Sejko; Acting Governor of the Central Bank of the Republic of Kosovo, Mr. Fehmi Mehmeti; Governor of the Central Bank of Montenegro, Mr. Radoje Zugic; Deputy Governor of the Bank of Bosnia and Herzegovina Ms. Belma Colakovic, as well as the Chief Economist of the Bank of Macedonia Mrs. Aneta Krstevska. The discussion focused mainly on the role of the financial market and its infrastructure, in particular the role of missing links (money market, pension funds, mutual funds and other market segments); as well as in introducing of technological innovations in the financial market "FinTech" in current developments regarding the risks, sustainability and effectiveness of monetary policy and financial stability.
More information on the debate regarding the above mentioned topics and on participation of Mr. Fehmi Mehmeti, Acting Governor of the CBK in this panel, you can find below.More