The speech of the CBK Governor, Mr. Bedri Hamza on Finance Fair 2015 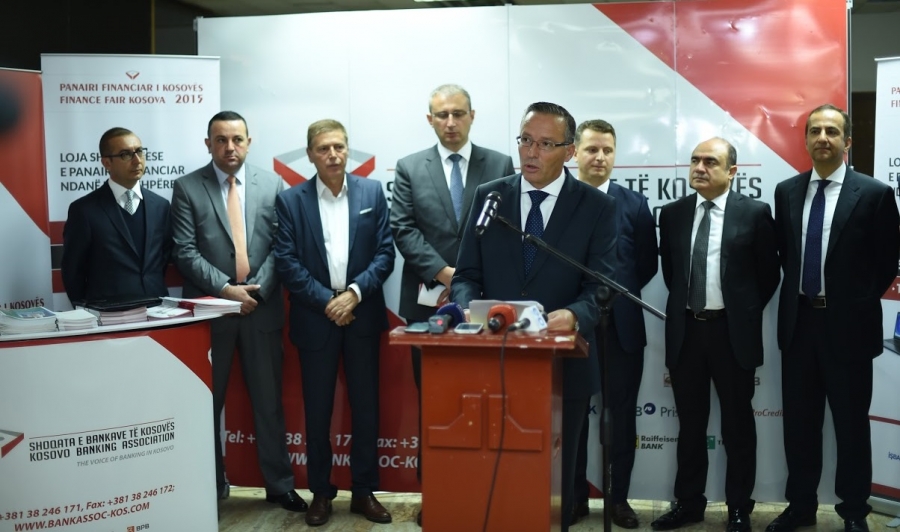 Dear Participants,
It is always a great pleasure to be part of this finance fair, which is being successfully organized for several years by Kosovo Banking Association. The continuous increase of number of financial institutions operating in Kosovo, along with expanding range of financial products offered in the domestic market, brings innovation in financial fair, year by year, serving thus as a very good overview of the ongoing development of the financial system of Kosovo. Apart from the possibility it offers to individual customers and businesses in familiarizing with the financial products offer in Kosovo, this fair can serve as a good opportunity for promoting a stronger liaison between different sectors of the financial system in Kosovo giving a greater impetus to a further development of this system.
***
The role of the financial system in supporting the country's economic development has further improved recently, mainly due to developments within the banking sector activity. Lending of the banking sector continued to pursue a significantly faster trend of growth. In August 2015, total assets of banking sector loans reached a value of about 2 billion euros, recording an annual growth rate of 7.4 percent, compared to the growth of 3.2 percent recorded in the same period of the last year. Only during January-August 2015, the value of new loans issued by the banking sector was € 737.6 million, compared to € 646.4 million issued during the same period of last year, and it is worth mentioning that most of these new loans are issued to enterprises for investment purposes. Credit growth during this period is the result of the eased lending standards and more favourable crediting conditions by banks. During this period banks reported an increased demand for loans by bank clients.

***
Increased bank lending continues to be financed by the steady growth of deposits in the banking sector, which in August reached a value of around 2.6 billion euros, recording annual growth of 5.7 percent.
***
Favourable developments during this period were also noticed in the structure of lending, with an increased attention to less credited sectors of the economy. More specifically, on the level of economic activity, the highest rate of growth during the last period is recorded in loans to the agricultural and the manufacturing sector, which until the August recorded an annual growth of 18.1 percent and 16.7 percent respectively. Growth in lending to these sectors undoubtedly represents a significant development for the economy, given the potential these sectors have in increasing domestic production and, thus, directly addressing two main challenges of Kosovo's economy: the high rate of unemployment and a large trade deficit. Bank financing for these sectors is expected to further increase following the establishment of the Kosovo Credit Guarantee Fund, which represents a very important development for businesses benefiting from the credit guarantee, as well as banks that will face lower level of potential losses that may result from credit risk.
***
One of the main issues reported constantly by businesses as an obstacle to their development was the high cost of bank financing. However, with an ongoing growth of competition in the banking market and a growing maturity of this sector, today I am pleased to state that in our economy this aspect of the business environment has improved, given significant decline of interest rate loans during 2015. In August 2015, the average interest rate on bank loans decreased to 7.9 percent compared to the average rate of 10.7 percent in August 2014 and 12 percent in August 2013.
This level of interest rates on loans represents an approximate level with the average of bank financing cost in other countries of the region, which is about 7 percent. On the other hand, the average interest rate on deposits in August increased, reaching 1 percent, compared with a rate of 0.9 percent in August 2014. As a result of these developments, the difference between the interest rate on loans and the deposits were narrowed significantly, dropping to 6.9 percentage points compared to 9.9 percentage points in August 2014.

Despite the narrowing of the difference between the interest rate on loans and deposits, Kosovo’s banking sector continued to improve its financial performance, recording a net profit in the amount of 59.7 million until August, compared with the net profit of 40.7 million euros recorded during the same period last year. However, this increase in profitability reflects mainly the reduction of costs of the banking sector, while revenue performance appears negative, with an annual decline of 2.5 percent in August 2015. Therefore, despite profit of the banking sector has improved substantially during the last period it is necessary to improve the performance of revenues in order to increase the sustainability of profitability in the sector.
***
The overall level of sustainability of the banking sector continues to be high, based on all indicators of financial health. Liquidity position remains strong, with liquidity ratios of 45.3 percent, which is significantly above the level required by the Central Bank. Similarly, the level of capitalization has further increased, reaching 19.3 percent, while the minimum rate required by the Central Bank is 12 percent. The satisfactory situation of stability of the banking sector is reflected in the good quality of the loan portfolio. The already low level of nonperforming loans decreased further, falling to 7.5 percent in August 2015 from 8.3 percent in August 2014. However, the quality of the loan portfolio requires constant monitoring and attention, especially considering acceleration of credit growth during the last period. The satisfactory condition of the banking sector stability by stress-test results, where the sector appears able to cope with various negative shocks considered in hypothetical scenarios.
***
Despite crediting of the banking sector, the domestic economy has had a higher financial support also from the Micro Financial Institutions sector. The value of total loans issued by this sector amounted to 78.9 million in August, marking an annual growth of 4.5 percent. However, the average interest rate on loans issued by microfinance institutions is still significantly higher compared with bank loans, which to some extent can be attributed to the financing structure of these institutions, which is dominated by external credit lines.