The CBK welcomes the World Bank’s assessment, in particular the improvement marked in the pillar of accessing finance

The CBK welcomes the World Bank's Doing Business Report's assessment on supporting the improvement of the overall ranking position, and in particular the improvement marked in the pillar of accessing finance and getting credit. The Doing Business Report regarding the access to finance, among other things, measures the scope, coverage, and credit information quality that credit registers have. With a good functioning, the Kosovo Credit Registry has formed an essential element of financial infrastructure in our economy, by strengthening access to financial services, particularly in loans. By collecting and sharing credit information, the credit registry has reduced the information asymmetry, has increased access to credit for small firms, has led to lower interest rates, has improved the borrower's discipline and has strengthened banking supervision and credit risk monitoring. The Credit Registry of Kosovo is administered by the Central Bank of the Republic of Kosovo (CBK) and consequently the improvement marked in this pillar is considered as a positive assessment for the CBK as it demonstrates the CBK's serious commitment and approach in achieving its objectives, duties and responsibilities foreseen by the legislation in force.
Improvement in access to finance ranks Kosovo very well in relation to the countries of the region, as seen in the Doing Business Report where it is noticed that Kosovo's economy is the 12th out of 190 countries of the world, a much better position compared to Albania, which is ranked 42nd or Croatia, which is ranked 77th , in ease of borrowing, in this context we have a positive assessment of the CBK as it proves the CBK's serious commitment and approach in achieving its objectives and duties and responsibilities foreseen by the legislation in force.
Kosovo is also much closer to the best performance economy in access to finance, measured by the distance from frontier which represents the ideal economy in the ease of the borrowing sample according to the World Bank report.
In the World Bank's Doing Business Report, Kosovo is among the top 10 economies worldwide with the most notable improvement in the business environment. In 2018, Kosovo has managed to rank as 40th out of the 190 countries involved. The overall ranking in the Doing Business Report is based on the measurement of some indicators that are used to evaluate some general pillars such as: 1) starting a business procedures, 2) getting a location, 3) accessing finance, 4) dealing with day-to-day operations, and 5) operating in a secure business environment. The improvement marked by the Kosovo economy as one of the top 10 performers, according to the World Bank, is based on the improvements noted in 1) starting a business procedures, 2) accessing finance and 3) resolving insolvency, as in the figure presented below. 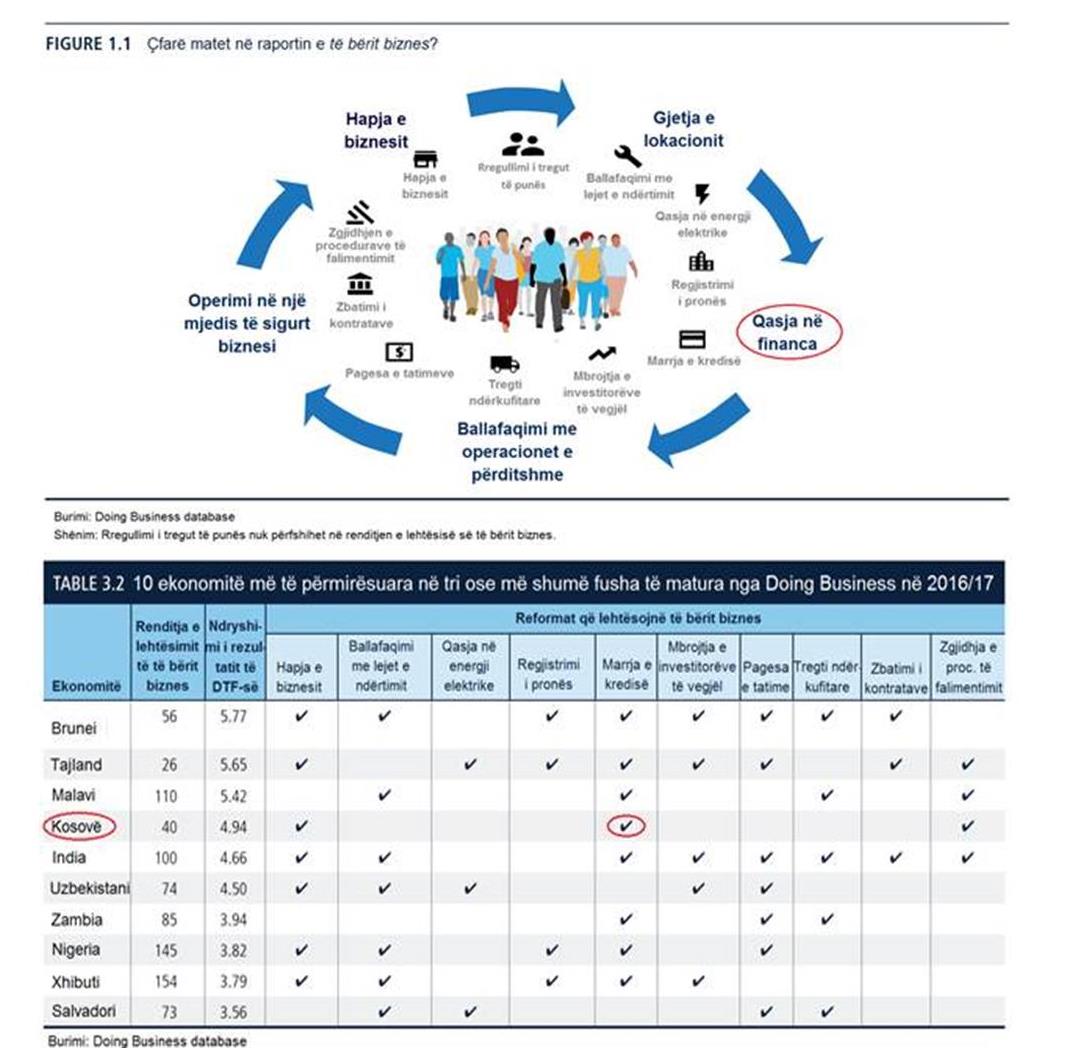