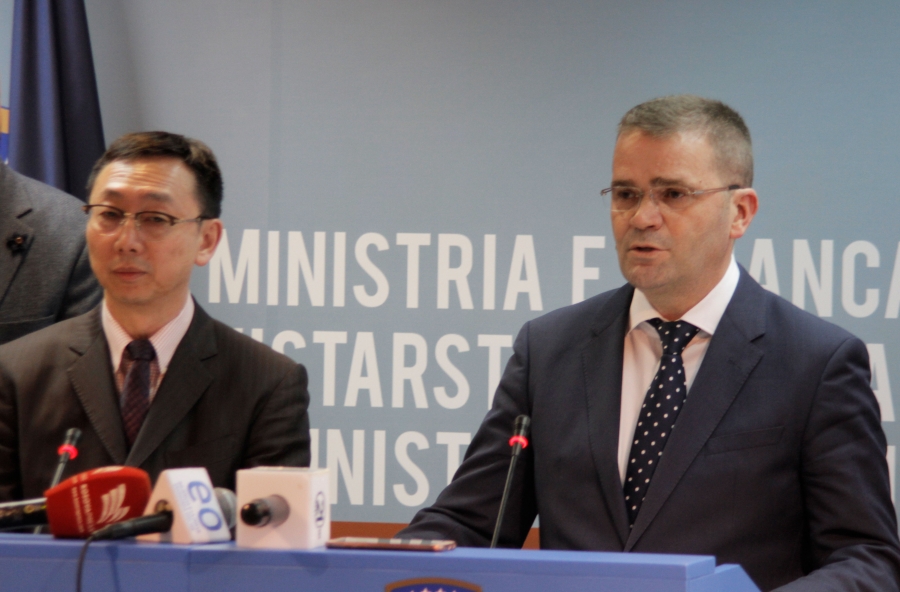 The Deputy Managing Director of the International Monetary Fund, Tao Zhang is on an official visit to the Republic of Kosovo, where he was welcomed to the meeting by Acting Governor of the Central Bank of Kosovo Fehmi Mehmeti and Minister of Finance Bedri Hamza.
The CBK Acting Governor Fehmi Mehmeti, thanking Mr. Tao Zhang for his support to Kosovo, and the CBK in particular said, “I ensure you that in any possible arrangement, we will remain a reliable partner to the IMF, and will intensively work on the implementation of further structural reforms, thus further enhancing the exceptional cooperation between our two institutions.” Mr. Mehmeti added, “Banking sector developments have been favorable as per financial soundness indicators, where I would like to emphasize a further decrease of non-performing loans, which has now decreased to 3.1%.”
On this occasion, Minister Hamza thanked Mr. Zhang for the IMF’s support and engagement for Kosovo. This is third visit of the IMF management representatives in Kosovo. “As you were notified, two weeks ago, the IMF Executive Board, led by Mr. Tao Zhang, approved the annual review of the state of the economic and fiscal situation in Kosovo (Article IV review). On this occasion, the Board discussed on economic developments in Kosovo for the year 2017, and the Executive Directors unanimously agreed that Kosovo has taken significant steps in strengthening fiscal resilience, enhancing financial sector stability, and advancing structural reforms” said Minister Hamza in a joint media conference with Mr. Tao Zhang
Minister Bedri Hamza also thanked Mr. Zhang for the IMF’s support in Kosovo’s move to Article VIII from Article XIV– which follows an IMF assessment that “Kosovo has no exchange restrictions on international transactions,” – hence strengthening the doing business environment in Kosovo. “We have a full agreement with the IMF regarding our fiscal, financial, and development objectives, both in short and long term. The IMF was and continues to be Kosovo’s vital partner in maintaining macro-financial stability,” added Minister Hamza.
Meanwhile, the IMF Deputy Managing Director, Mr. Tao Zhang, thanked Minister Hamza and the CBK Acting Governor Fehmi Mehmeti for an excellent and sincere cooperation with the IMF, and expressed the willingness and readiness of the IMF for supporting Kosovo’s further development.