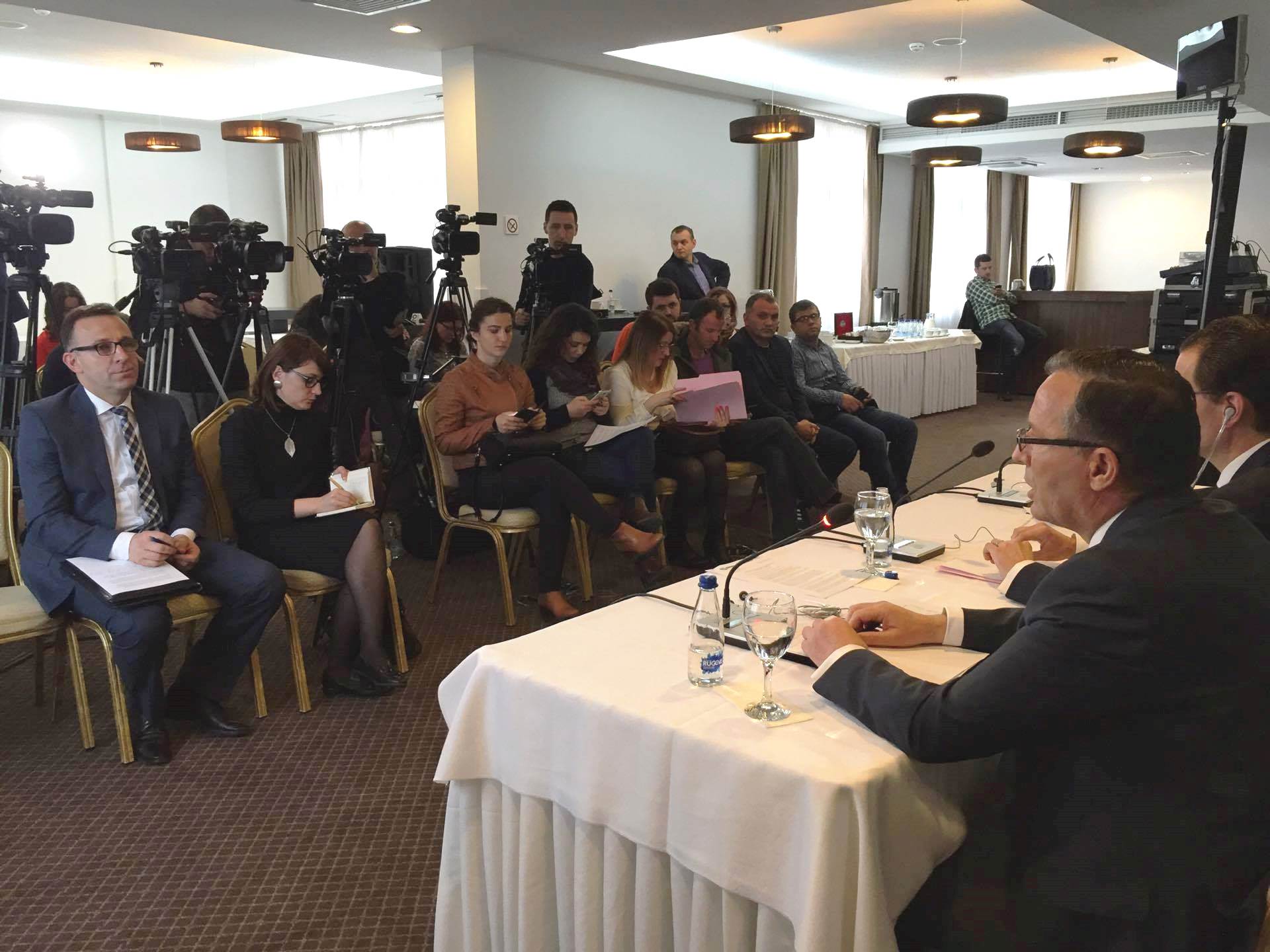 Mr. Ruud Vermeulen, the IMF resident representative to Kosovo mentioned criteria met by Kosovo which enables Kosovo to reimburse about €100 million additional funds, which are intended as budget revenues. “Yesterday, the Board of the International Monetary Fund completed the second and third review of the program and estimated that criteria have been satisfactorily fulfilled, which resulted in disbursement of EUR100 million, which would bring the disbursement of about €172 million of the total disbursements to about €184 million.” According to him, Kosovo continues to have the highest economic growth in the region, but a greater increase is needed to reduce the unemployment rate. Again, according to him, this year it is expected an economic growth of 3 to 4 percent, which is above the average of the region countries.
Minister Hoti, mentioned that before the Review of the Second and Third Program in 2016 and 2017 that yesterday resulted in additional funding of EUR 100 million, the following measures were taken: In February 2016, the Assembly of Kosovo nominated names for the empty seats to the Board of Public Procurement Review Body (BPPRB).In March 2016, the Government of Kosovo established the rule for setting salaries in the public sector in accordance with the country's economic growth, as part of amendments to the LPFMA. In March 2016, as part of amendments to the LPFMA, the Government of Kosovo has created the "clause for investments", a rule that extends the options for increasing the budget, but at the same time limits the budget increase only by favorable funding and capital investments with economic development character. In March 2016, the Government of Kosovo has also approved the draft law that makes e-procurement mandatory for all central government agencies. In March 2016, the Government of Kosovo has approved a detailed concept paper with a list of new capital projects that will be funded by the International Financial Institutions. In October 2016 and in February 2017, the Kosovo Government expanded the list of goods and services for joint/ centralized procurement. In October 2016, as part of centralized procurement, contracts were awarded to 43 central government institutions and agencies for fuel, office supplies and plane tickets. In December 2016, upon the proposal of the Government, the Assembly of Kosovo adopted the 2017 budget in line with policies and parameters that the government has determined by the program of the IMF and the Assembly of Kosovo has adopted amendments to the Law on War Veterans that provide a sustainable funding mechanism for veterans' benefits. Other program commitments are also met which is worth noting the amendment to the Law on the CBK, which was approved last week by the Assembly of Kosovo, according to the IMF proposals. Minister Hoti also said that the relevant institutions of the Republic of Kosovo have already started to implement the criteria that are foreseen to be met by the Fourth Review of the Program. The Government of the Republic of Kosovo is committed to fulfill all obligations arising from this Agreement, given the great importance that the implementation has for our country and to maintaining financial stability.