President of the Republic of Kosovo, Mrs. Atifete Jahjaga, received today at a meeting the Governor of the Central Bank of Kosovo, Mr. Bedri Hamza, who submitted this institution&rsquo;s 2013 Annual Report to Madam President. 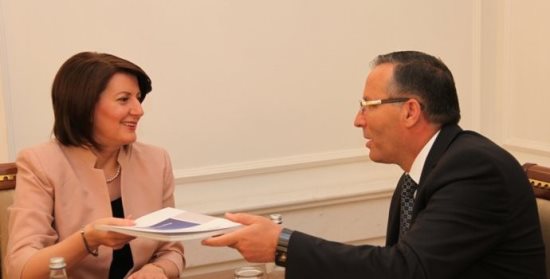 Governor Hamza informed President Jahjaga on the process of economic development of the country, which he classified in positive parameters, on the viable financial and fiscal system of the country , on the stable and secure banking system  and the rise of exports in relation with to the import of goods during 2013.

Governor of the Central Bank of Kosovo, Mr .Bedri Hamza, said that Kosovo has achieved advances in economic development and considered important the necessity for the guaranteeing of a good climate for business and for the banking system of the country.

President Jahjaga praised the work being carried out by CBK and emphasized the need for this institution&rsquo;s continuation of efforts on maintenance of financial stability of Kosovo.