The Interbank Payment System operates organized and oversight by the CBK, which in addition to administrator and regulatory responsibilities for this system, also participates directly: for itself and on behalf of government institutions.
Therefore, the Central Bank’s primary objective is to promote and maintain a safe, sound and efficient payment system and a stable infrastructure.
The Central Bank of the Republic of Kosovo is the owner and operator of the only payment system in Kosovo, Interbank Payment System (IPS). This payment system clears all high value and retail payments, including priority payments, individual payments, mass payments, Kos-Giro payments, Direct Debit payments and Securities.
IPS is a platform which is fully based in modern technology, ISO 20022 standards and has proven itself to be highly scalable and functional system satisfying the needs of the banking community and its users. 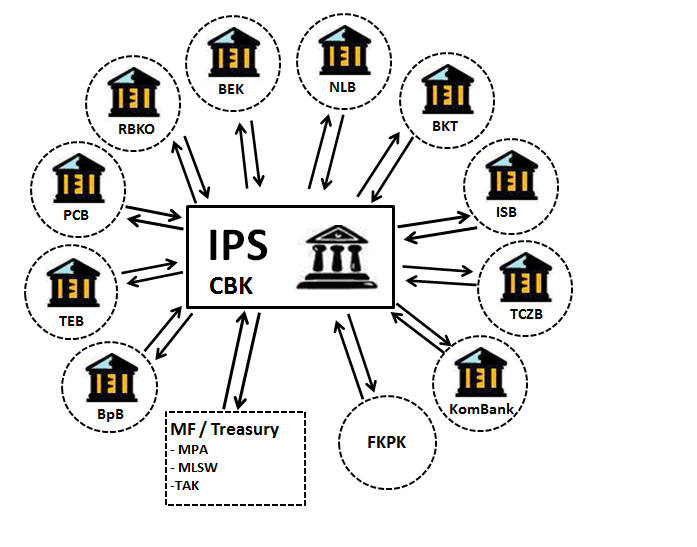 Currently there are 13 direct participants in IPS. This includes 10 commercial banks and the Central Bank of Kosovo (for itself and on behalf of the government), MF/Treasury (for three institutions) and the Pensions Fund. Microfinance institutions, insurance companies, etc. hold transaction accounts with direct participants, which act as their agents.
Commercial banks are connected to IPS using leased lines (from telecommunication companies) according to the “hub-and-spoke” topology. Installation of fiber optic lines is being finalized, which will replace leased lines (leased lines will be used as back up connection lines).
The CBK runs three IPS (ACH) clearing sessions per day for all payments with value under 10,000 Euro, mass payments, Giro Payments, Direct Debit. Priority Payments and all payments with value over 10,000 Euro are processed in real time (8:15-15:45). The settlement of payments is conducted in real time for priority and large value payments, while for other payments is done in net basis through clearing sessions in accounts in IPS (ATS/RTGS+ACH). CBK monitors the settlement process, in particular to see that the minimum liquidity reserve levels are not breached. The mandatory reserve level is 10% of each bank’s qualifying deposit base, of which at least half (5%) is required to be held with the CBK at all times; therefore the banks are permitted to go down on their single accounts to the equivalent amount of this 5% during settlement – but not below. If there is a shortfall, the bank is required to find sufficient cash to replenish its single account.
IPS is used for both small-value and large-value domestic transactions. This system clears all priority payments, individual payments, mass payments, Kos-Giro payments, and direct debit payments.
Priority payments can be submitted at any time during the IPS operating day and which are required to be cleared immediately by IPS on a gross basis.
Individual payments are single credit transfers which are typically initiated at a bank branch by the payer’s completing a paper payment order which is then input to the bank’s core banking system and subsequently forwarded to IPS for clearing. The payer either pays in cash or authorizes a deduction from his/her bank account. This instrument is generally analogous to a credit transfer, as defined by the BIS/CPSS.
These can be used for either one-to-many payments (for example payment of salaries) or many-to-one (which are primarily used for consolidation of government tax before being forwarded to the CBK by commercial banks). During each clearing session, IPS breaks down the one-to-many payments, and consolidates the many-to-one payments, into individual payments which are then cleared.
Kos Giro payments are a more efficient way with which consumers can pay their bills. Under the scheme, billers such as utility companies, government institutions (Customs, Kosovo Property Agency), etc. include a standardized payment form at the foot of the bills they send to their consumers. This payment form contains payment details in a barcode which is scanned when the consumer presents the bill for payment at any bank office. The payment details are captured and forwarded via the commercial bank’s core banking system to IPS, and either the payer pays in cash or their account is debited (if the payer has a bank account and the form is presented at the payer’s bank).
Direct Debit was introduced in November 2009, for public use in Kosovo. It is a new type of payment instrument with which the client authorizes his bank through the company to debit (withdraw) funds directly from the bank account. This instrument provides a standardized and automated way that is suitable for regular and recurrent payments. Also, in IPS is conducted the settlement of Securities through the interface of CSD in CBK with the IPS.
The new interbank payment system known as the automated transfer system (ATS) is implemented on July 1, 2016. Implementation of this system is one of the key steps that CBK has undertaken to strengthen the stability and increase the efficiency of financial sector and banking sector in particular.
The new interbank payment system, called ATS (automated transfer system), consists of two main components: RTGS component (Real Time Gross Settlement) which enables the transfer of funds in real time; and ACH component (automatic clearing house) which processes group payments and low value payments, through three clearing sessions.
This system is designed according to best international standards for the area of payment systems (ISO 20022), the modern technology and best practices, which makes Kosovo one of first countries to implement these standards.