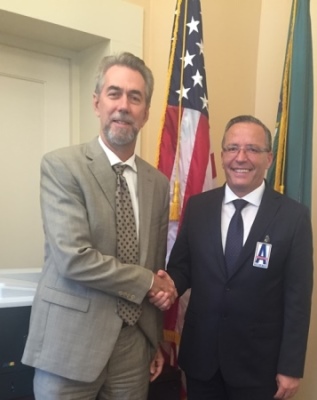 During his stay in Washington Governor Hamza met with officials from the US Treasury Department, his central bank counterparts from different countries, as well as representatives of other international financial institutions. On this occasion, Governor Hamza had meetings with Mr. Ibrahim Canakci Constituency Executive Director of Kosovo in the IMF, Deputy Managing Director of IMF Mr. Tao Zhang, Ms. Ellein Goldstein World Bank Country Director for the Western Balkans, Mr. Cyril Muller World Bank’s vice President for Europe and Central Asia Region, Mr. Paul Thomsen, Director of the European Department at the IMF, Mr. Godts Franc Executive Director in the World Bank, as well as Mr. Lary McDonald by the Department of Technical Assistance of the US Treasury.

During these activities and meetings, high officials of the IMF and World Bank in discussions with the delegation from the Republic of Kosovo have appreciated the so far achievements and the progress made in the financial sector and the implementation of tasks within the IMF program and the increase in efficiency in the implementation of projects related to the World Bank. During these meetings, the Kosovo delegation has received support and promises that assistance for the Kosovo institutions will continue in the future.