Governor of the Central Bank of the Republic of Kosovo, Fehmi Mehmeti, ensured the businesses that the institution which he is leading is highly committed to support the growth of economic development.

In the discussion organized by the American Chamber of Commerce in Kosovo entitled "The impact of the banking sector on the economic development in Kosovo", the Governor Mehmeti said that the banking sector has, over the recent years, considerably increased the role of financing, by accelerating the loan growth rate, and has marked progress in improving the conditions for sustainable financing of the economy, namely businesses.

"During this year, there was loan growth in the agricultural sector and the manufacturing sector.  Greater support to these economic sectors but also to other sectors with greatest potential to generate economic growth is needed in order to have a more sustainable economic development. In October 2018, the average loan interest rate was 6.6%, which represents a significant improvement if we compare it with rates of 4 years ago. Also, the decline of the loan interest rate is clearly notable in all sectors. The interest rate on loans for agriculture decreased to 7.5% compared 16.7% 5 years ago, in the industry sector, the interest rate decreased to 5.8% compared to 12.2% in the previous 5 years, and also in the services sector, the interest rate has decreased from 11.1% to 6.3%.  In addition, banks have greatly eased the loan approval standards, collateral requirements have declined, and the loan maturity term has been extended. An important step for these sectors was also the establishment of the Credit Guarantee Fund ", said Governor Mehmeti. 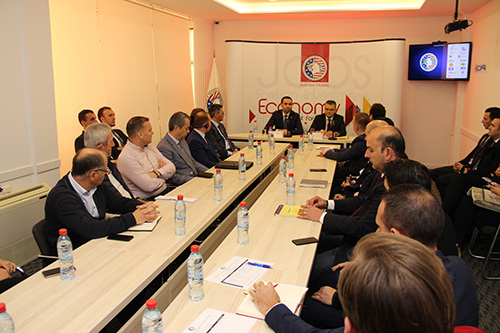 Governor Mehmeti thanked the American Chamber of Commerce in Kosovo for the organization of this discussion, expressing high appreciation for the contribution that businesses are giving in the development of the country.

While, AmCham Executive Director, Arian Zeka, said that the banking sector played an important role in the development of activities such as production, trade, and services that today are flourishing in our country.

"I congratulate the CBK on the work done in creating a sound financial system, which is, of course, an important pillar of an emerging economy, as is the case with Kosovo, as well as for the fact that this has been a sound financial system, which presented Kosovo positively in different reports. It is encouraging that the loan rate has halved over the last few years, which gives us hope that the banking sector will continue to finance other important projects for the country's economic development in the future".