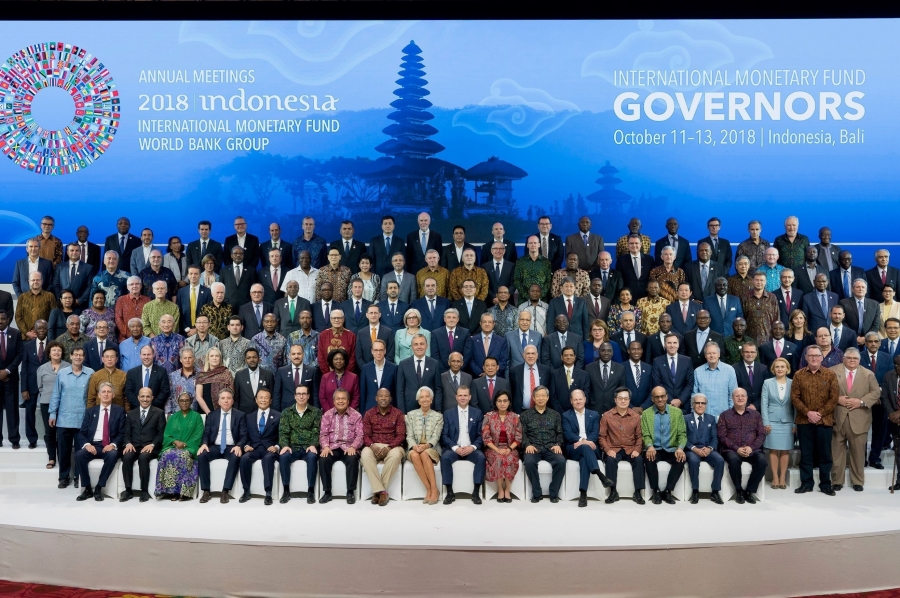 A senior delegation of the Republic of Kosovo consisting of the Governor of the Central Bank of Kosovo, Fehmi Mehmeti, Minister of Finance, Bedri Hamza and other officials concluded their participation in the International Monetary Fund and the World Bank Group Annual Meetings, which took place in Bali, Indonesia from 9-13 October, 2018.
On the last day of their stay, Governor Mehmeti and Minister Hamza participated in the discussions of Central and Eastern European Governors and Ministers on the Regional Economic Prospects in Central and South-East Europe.
On the same day, the CBK representatives participated in the IMF's International Monetary and Financial Committee plenary session, where the topic of discussion was: enhancing cooperation to avoid risks, the global parameters, and the IMF policies and priorities in assisting member countries.
During the stay in Indonesia and participation in plenary sessions organized by the IMF and the World Bank, the Central Bank of Kosovo delegation headed by the Governor met with the International Monetary Fund and the World Bank senior executives who expressed their support to the CBK in achieving its objectives in sustaining country's development.
During the IMF and the WB Group Annual Meetings, Governor Fehmi Mehmeti, attended the IMF and WB Group plenary session, where the President of Indonesia, His Excellency Joko Widodo, the IMF Managing Director, Christine Lagarde, and the World Bank President, Jim Yong Kim, held the main speeches.
Governor Mehmeti met with the IMF Deputy Managing Director, Tao Zhang, whom he briefed on the overall developments in the financial system and thanked him for the ongoing IMF support to the CBK over the years.
During the annual meetings, the Central Bank of Kosovo has received support from the IMF Department for Europe regarding the CBK request for Financial Stability Sector Review.
During the visit, a Memorandum of Understanding was signed between the Central Bank of the Republic of Kosovo, represented by Governor Mehmeti and the Central Bank of Turkey, represented by Governor Çetinkaya, regarding the exchange of information between the two institutions.
In addition, meetings were held with the new Director of our Constituency in the IMF, Raci Kaya, and the incoming Director of our Constituency at the World Bank, Guenther Schoenleitner.
In the frame of annual meetings in Bali, Indonesia, the CBK delegation participated in the opening meeting of the International Monetary and Financial Committee (IMFC) and in separate meetings of the World Bank and International Monetary Fund Constituency, part of which is also Kosovo.
The regular Meetings of the Boards of Governors of the International Monetary Fund (IMF) and the World Bank Group (WBG) bring together governors, central bankers, ministers of finance and development, private sector executives, representatives from civil society organizations and academics to discuss finance issues focused on the global economy, international development and the and the world's financial system.