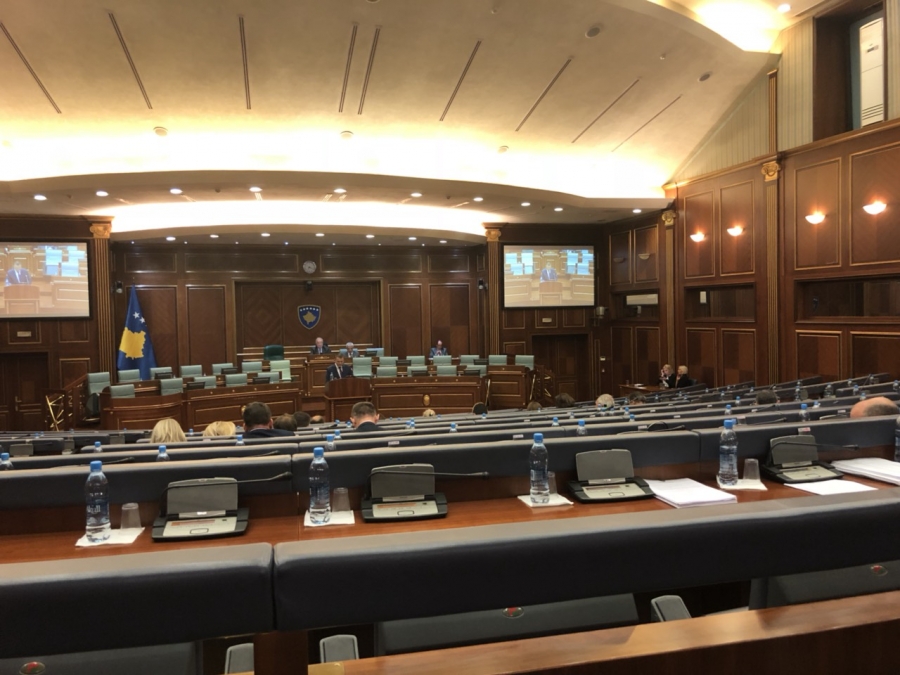 Governor of the Central Bank of the Republic of Kosovo, Fehmi Mehmeti presented the 2017 Annual Report to the Members of the Assembly of the Republic of Kosovo.
Governor Mehmeti stated that during 2017, the CBK has managed to successfully achieve its legal objectives by providing a stable financial system and sustainable economic development of the country.
”During this year, the CBK has continued to advance its institutional capacities in all spheres of its scope. Particular attention has been paid to providing efficient services to public authorities, financial institutions and the public in general. Favorable performance of the Eurozone economy had a positive impact on the economies of the Western Balkans, manifested by improving the net export position and increasing of foreign direct investments, which made a significant contribution to the continued growth of these economies”, Mehmeti declared.
Governor Mehmeti said that the financial system is continuing to grow at a steady pace, representing one of the most important components of development and stability of the country's economy.
“The banking sector's lending activity has continued to be characterized by an accelerated growth rate as the result of improved lending conditions by banks and increased demand for enterprises and households loans. In 2017, the value of total loans reached euro 2.5 billion, representing an annual increase to 11.5 per cent. Lending to all economic sectors marked an increase during 2017. The sectors that marked most significant increase were the construction, agriculture and production sectors (26.1 per cent, 13.4 per cent and 9.3 per cent respectively). Significant decline in loan interest rates by banks during last two years represents a very important development for facilitating access to finance for these sectors as well” stated Governor Mehmeti, highlighting also a significant role of the Kosovo Credit Guarantee Fund, the use of which has marked a growing trend, with over 30 million euros at the end of 2017.
Governor Mehmeti has also mentioned as the positive development, the decline of the loan interest rates, which for a long time have been considered as one of the main obstacles for business development, continued to decline in 2017.
"In 2017, loan interest rates continued, down to the average level of other countries in the region. By the end of 2017, the average loan interest rate was 6.8 percent, compared with the 7.2 percent rate in the previous year. Reduce of the financing cost on loans was also influenced by the interest rate on deposits, which in 2017 was 1.3 percent, while the total value of deposits in the banking sector amounted to 3.1 billion euros, which represents an annual growth of 6.8 percent. The non-performing loans to total loans ratio, this year, decreased to 3.1 percent compared to the rate of 4.9 percent in 2016. Pension system recorded positive performance as the result of the growth realized by pension contributions and increase in the return on investment. The total value of assets of the pension sector amounted to euro 1.65 billion, a significant increase of assets by 16.0 percent.
Regarding the insurance sector, the value of total written premiums in 2017 marked an annual growth of 3.9 percent, while in the same period, the total claims paid by insurance companies and the Kosovo Insurance Bureau marked an annual growth of 17.8 percent. The microfinance and non-bank financial sector continued to serve as an important source of funding, especially for small enterprises and households. In 2017, the total value of this sector's loans amounted to euro 143.9 million, corresponding to a significant annual growth of 32.1 percent ".
Governor Mehmeti has also mentioned the CBK continuous work towards advancement of secondary legislation and the harmonization of this legislation with the EU directives and international standards.
The CBK forecasts for 2018 suggest that the real economic growth rate is expected to fluctuate at an interval of 4.2 to 4.4 percent.
The main contributor of growth are considered to be investments, which are expected to reach a real growth of 10.1 percent, based on projections for significant public investment growth (25.8 percent) and private investment (5.0 percent). A significant contribution to the growth of investments is expected to have the growth of banking lending.
On the other hand, the Kosovo Assembly of members stated that the 2017 Annual Report is in line with the Law on the CBK and provides all the data on the economic situation in general, including the data on financial institutions under its supervision.
According to them, the report should be a good guide for the government regarding development of policies, including budget processes.