Introductory visit of Prof. Luboteni Chairperson of the CBAK to President Sejdiu 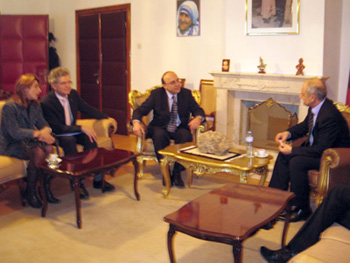 Pristina, January 31st 2008 &ndash; The President of Kosovo, Dr. Fatmir Sejdiu had a meeting with the new Chairman of the Governing Board of the Central Banking Authority of Kosovo, Mr. Gazmend Luboteni and the Managing Director, Mr. Michel Svetchine.

President Sejdiu indicated that the Central Bank of Kosovo will play an important part in the further development of economic policies and in the acceleration of Kosovo&rsquo;s integration in European structures.

Representatives of CBAK notified the President regarding CBAK its future  developments.

It was also discussed regarding the stability of the banking system in Kosovo and the added confidence of citizens in banks that operate in Kosovo.

The President of Kosovo congratulated the Chairman of the Governing Board of CBAK on his new added responsibilities and indicated his unreserved support towards this institution.