In Tirana was held the Conference “Do crises change economic fundamentals in SEE?” hosted by the Bank of Albania, organised in cooperation with the South East European Studies at Oxford 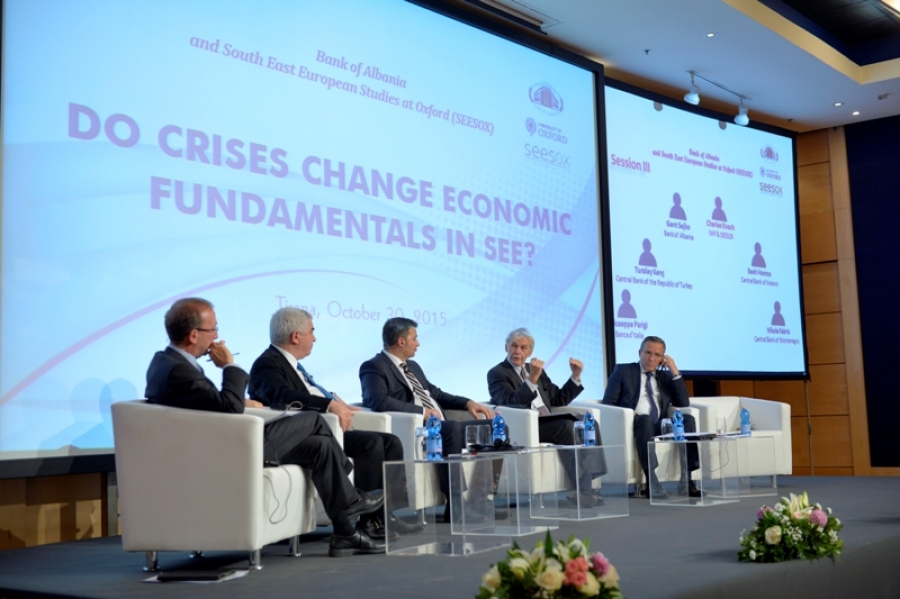 The CBK Governor, Mr. Bedri Hamza attended the International Conference hosted by the Bank of Albania, organised in cooperation with the South East European Studies at Oxford. This event gathered in Tirana the banks’ governors, officials, senior bankers and financial experts of the region and beyond.
Initially, the participants were addressed by Mr. Gent Sejko, Governor of the Bank of Albania, Mr. Edi Rama, Prime Minister of the Republic of Albania, and Mr. Othon Anastasakis, Director of South East European Studies at University of Oxford.
During the conference proceedings, panel participants addressed various topics dealing mainly with economic and financial challenges faced by their countries in the past and the challenges they are currently facing.
Among the topics covered the following should be mentioned: "Has the economy changed during the post-crisis period"; "economic environment, policies and their implementation"; "from crisis to crisis in European Union countries";" Albanian economy, environment and policy implementation"; "a new model for banks business in the light of the global financial crisis"; "what has changed during the crisis, the change of financial intermediation and implications for financial stability and supervision" and the regulation and post-crisis challenges in Eastern Europe, etc.
The conference had three sessions. In the first session, participants discussed on the effectiveness of monetary and fiscal policy, structural changes and risks to economy and financial systems, challenges and future strategic policies in emerging and South East European countries.
In the second session of Conference, discussions focused on impacts of crisis on the macroeconomic and financial balance, and analysed the effectiveness of implemented economic policies in these countries.
Whereas in the third session, among the panelists were Governor Hamza, the Governor of Albania Mr. Gent Sejko, Mr. Turalay Kenç, Deputy Governor of the Bank of Turkey, Mr. Nikola Fabris, Deputy Governor of the Bank of Montenegro and Mr. Giuseppe Parigi, Senior Official of the Bank of Italy, the topic was discussed in the form of a discussing among panel- representatives from the central banks who shared their opinions on the recent regional economic developments and the challenges facing these economies to become more attractive to foreign investments.
It was emphasized the experiences of certain regional countries during the post-crisis period and the actual role of financial systems in economic development of the countries.
The Governor Hamza together with the Chairman of the CBK Board, Mr. Bedri Peci attended the Inauguration of the Reconstructed Building and Museum of the Bank of Albania where they were welcomed by the Governor of the Bank of Albania Mr. Gent Sejko and his associates, and they also head meetings with officials of the Albanian state institutions and representatives of various institutions of participating countries in the Conference.