His Excellency Mr.Ferrarese, the Ambassador of Italy in Kosovo with a delegation visited the Central Bank of the Republic of Kosovo 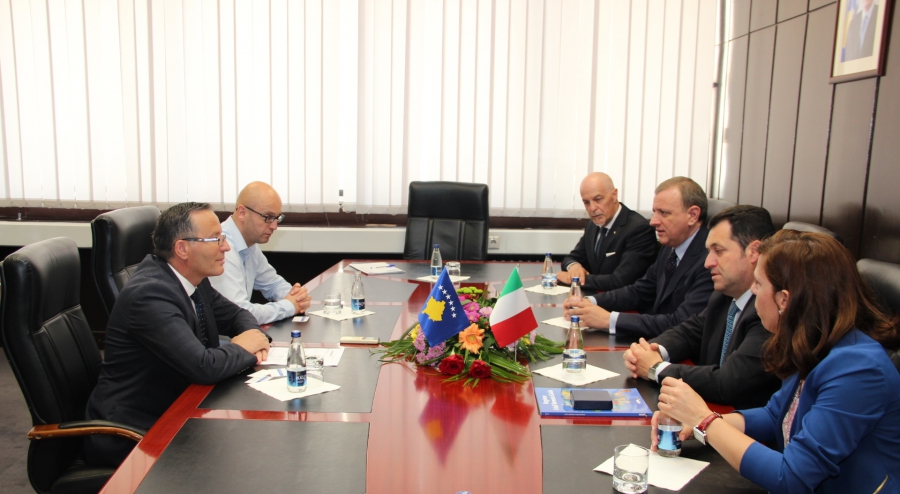 His Excellency, Mr. Andreas Ferrarese, Iitalian Ambassador in Kosovo together with a delegation consisting of Mr. Giorgio Baiutti, Chief of Staff of the Regional Council of Friuli Venezia Giulia, Mr. Franco Iacop Chairman of the Regional Council and Coordinator of Presidents of Legislative Assemblies and Mr. Mauro Dal Saviopo visited the Central Bank of the Republic of Kosovo, where they were received by CBK’s governor Mr. Bedri Hamza.
Initially Governor Hamza thanked the Italian Ambassador and the delegation led by him for their visit to the CBK, adding that Italy as a friend of Kosovo, has consistently been the biggest supporter of economic and institutional development in the country. On this occasion, Governor Hamza made a summary of developments in CBK, focusing on in the banking system in Kosovo making a description regarding the economic developments and the situation in general, as well as trends in the country's financial sector, in particular.
Meanwhile, his Excellency the Italian Ambassador Mr. Andreas Ferrarese thanked the Governor for the hosting and stressed that Italy continues to be focused on supporting economic and institutional development of Kosovo and that the information provided by the Governor Hamza, on the economic situation and financial support would be useful to further increase this support as in both the identification of new projects and encouraging new investors as well as the promoting further cooperation between the CBK and the Central Bank of Italy, also, with other economic institutions in Italy.

Governor Hamza expressed full readiness of his own and of the institution led by him to engage in deepening of cooperation not only with the Bank of Italy, but this cooperation shall also be extend to strategic partners from Italy who will be welcome to invest in Kosovo. Both parties agreed that meetings at this level shall be more frequent and create opportunities for cooperation and the topics covered in the future be made a reality in practice.