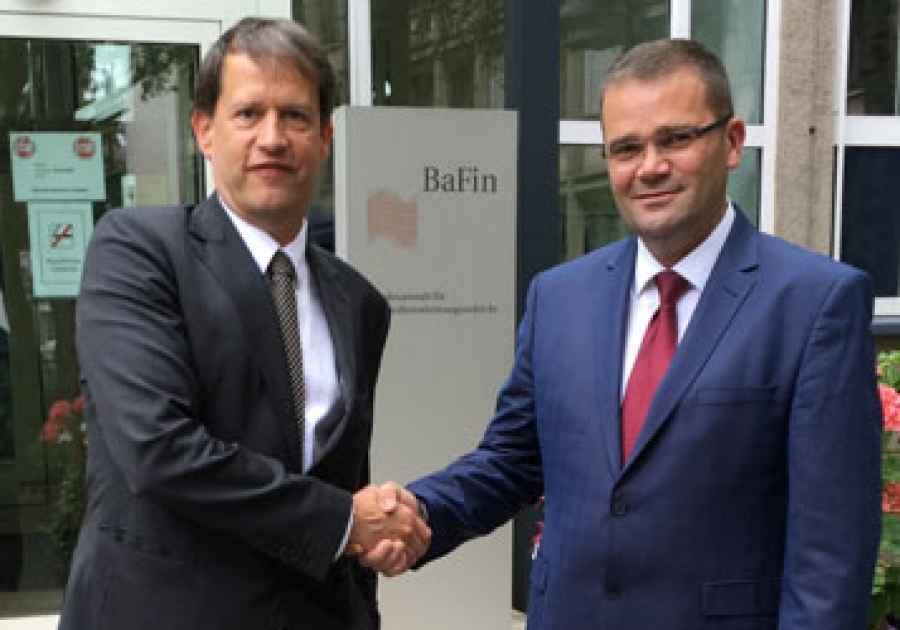 A delegation of the CBK, led by the Deputy Governor for Financial Supervision Mr. Fehmi Mehmeti, comprising also of CBK and GIZ staff members, conducted an official visit to the regulatory agencies in Germany. During this visit the CBK delegation had separate meetings with senior representatives of the Federal Financial Supervisory Authority BaFin (head office in Bonn), as well as senior representatives of the European Central Bank and the Deutsche Bundesbank based in Frankfurt.

In the meeting with Mr. Peter Kruschel, Director for International Technical Cooperation within BaFin , the Deputy Governor Mehmeti thanked Mr. Kruschel for the continuous support that BaFin is providing to the CBK. Furthermore Mr. Mehmeti informed Mr. Kruschel about the latest developments in the financial sector in Kosovo as well as about the recent developed initiatives initiated by the CBK with the aim to provide a robust financial system in Kosovo. These initiatives include the development of a new reporting framework; the newly approved regulations on emergency liquidity assistance and also a registry of bank account holders. In addition the introduction of the risk-based supervision manual, which was produced with the support of the IMF was another key topic. Mr. Kruschel expressed the willingness of BaFin to continue the support for CBK in the field of banking and also highlighted the institution’s experience in insurance supervision, where additional support to CBK can be granted. The meeting with Mrs. Verena Kirsch, in charge for the supervision of ProCredit, had a clear focus of exchanging information in regard to the performance of the financial sector in Kosovo in general and ProCredit Bank Kosovo specifically. Both institutions shared their information about ProCredit and reiterated their willingness to share information about the supervised institution on a regular basis.

The meeting with ECB took place at the EURO Tower building, where the delegation of the CBK was welcomed by Mr. Rolf Klug, Deputy Director, Directorate General Micro-Prudential Supervision II. The meeting was also attended by the JST team leaders responsible for the supervision of Raiffeisen Bank Group Austria and NLB Group Slovenia, banks which are now included in the Single Supervisory Mechanism regime and also operate in the Republic of Kosovo. The Deputy Governor, informed the representatives of the ECB on the recent developments in the financial sector, as well as projects developed by the CBK in regard to banking supervision. Furthermore the latest financial data of NLB Pristina and Raiffeisen Bank Kosovo were shared with the regulators. The ECB representatives thanked Deputy Governor Mehmeti for approving the ECB request for an examination of NLB Pristina as part of their worldwide assessment of the credit risk of the NLB Group. A potential Memorandum of Understanding (MoU) between the ECB and the CBK was also discussed to be prepared in the near future in order to enable better exchange of information between the both supervisory institutions.
During the visit to the Deutsche Bundesbank, the CBK delegation had a meeting with Mr. Martin Dinkelborg, Director of Centre for Technical Central Bank Cooperation and other representatives of his unit. After the general overview on the financial sector in the Republic of Kosovo, provided by the Deputy Governor Mr. Mehmeti, Mr. Dinkelborg informed the Deputy Governor Mehmeti about the tasks and achievements of the technical Central Bank cooperation unit.