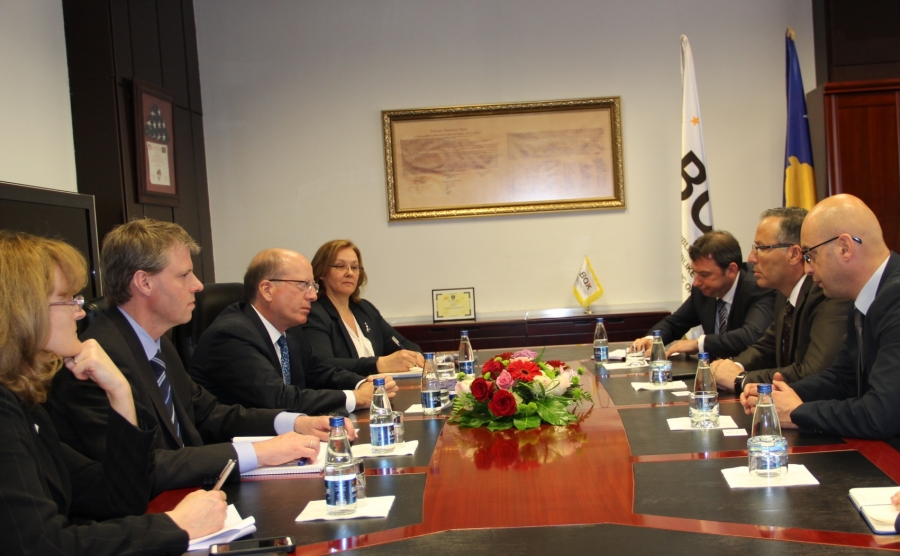 On this meeting, the Governor Hamza thanked the EBRD for the continuous support that has given and is still giving to Kosovo provided in various forms to its institutions, including EBRD participation in our financial system. Further on he informed Mr. Bennet on current responsibilities and commitments of the CBK, as well as the challenges this institution is facing. Further, he informed the representative of the EBRD's new with the latest developments in the financial sector, stressing that this sector continues to be sustainable operating in full compliance with all laws and regulations, where EBRD also has a positive role for this good performance with their presence in form of equity in some of Kosovo banks.
Governor Hamza expressed also his commitment to continue and raise further forms of institutional cooperation with the EBRD. Governor Hamza, thanking the EBRD for their so far support in various sectors of the economy, with particular emphasis on the financial sector of Kosovo, emphasized the need and importance of greater support after the membership of the Republic of Kosovo in this financial institution.
On his side, the Vice President of the EBRD expressed his commitment to continue to provide assistance in the form of projects that will serve to the development of Kosovo. He also inquired about current priorities which would be in favour of Kosovo's economic development and that could be supported by the EBRD. Besides Mr. Bennet the meeting was also attended by his associates in Kosovo Resident Representative Ms. Elena Petrovska, Mr. Holger Muent Director of the Western Balkans, Ms. Agnieszka Lukasik adviser to Vice President and Mr.Oleg Levitin political adviser.