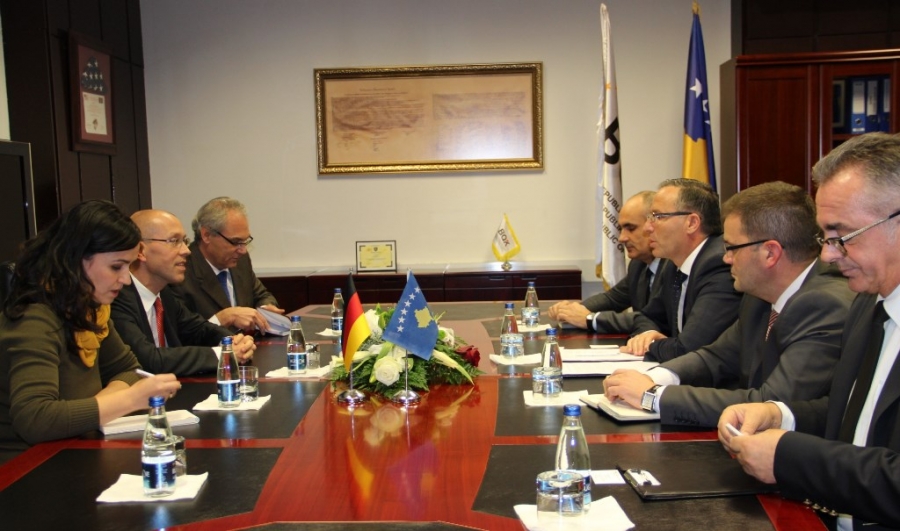 The Governor of the Central Bank of the Republic of Kosovo, Bedri Hamza, hosted a reception for Mr. Jörg Asmussen, Permanent State Secretary at German Federal Ministry of Labor and Social Affairs, accompanied by Mr. Matthias Kiesler, Deputy Head of Mission of the German Embassy and Head of the German Embassy Economic Department.

Governor Hamza informed his guests about recent development in the financial sector in Kosovo, indicating its soundness and positive performance of the banking sector in general. Mr. Hamza emphasized the efforts that the CBK is taking to adopt highest international standards in accordance with Basel Accords and EU Directives in the area of banking regulation and supervision. He pointed out that these efforts are in line with the ultimate goal of the CBK to introduce best practices in banking regulation and ultimately accessing the European System of Central Banks.

In this context, Governor Hamza expressed his appreciation for the invaluable support that the CBK has received from German Government and German taxpayers in general, through technical assistance implemented by the GIZ, which is aimed at improving operations of the CBK and enhancing technical and human capacities of the CBK staff. He valued prompt reactions from German Embassy to provide support concerning the areas which were identified as a priority by the CBK.

Mr. Hamza expressed his eagerness to continue very close cooperation with German institutions, taking into account the quality of assistance and positive German experience in overcoming financial turbulence related to Eurozone crisis. In a general note, Governor Hamza stressed that Kosovo emigrants in Germany could serve as a strong tie in mutual cooperation between the two countries.