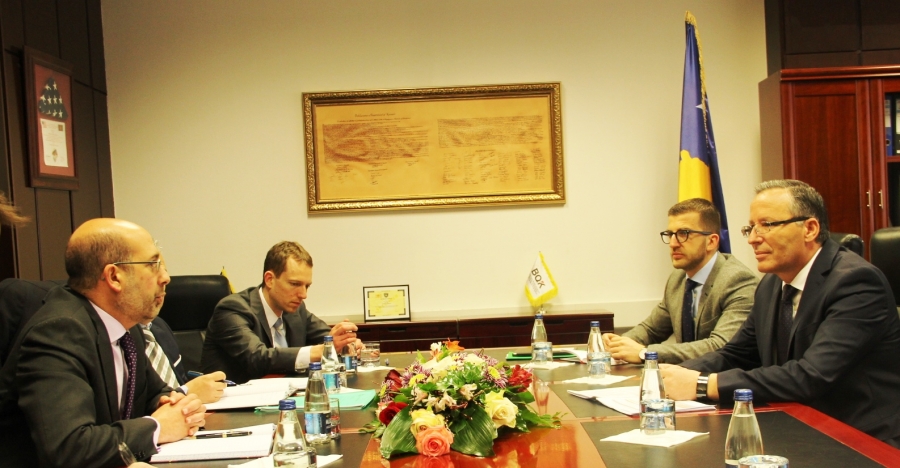 A senior delegation of the International Monetary Fund Mission (IMF), led by Mr. Miniane Jacques is visiting Kosovo lately. They were received today in a meeting by the Governor of the Central Bank of the Republic of Kosovo Mr. Bedri Hamza.
During this meeting Governor Hamza informed the delegation of the IMF Mission led by Mr. Jacques Miniane about the current economic and financial developments in the country with special emphasis on the performance of the banking system in Kosovo. Governor Hamza revealed to this IMF Mission delegation also the key indicators of the financial sector during 2015, and the current performance for the actual period of the year. The Governor further said that the banking sector in Kosovo continues to be stable, well capitalized and profitable. We were dealing with an increase of crediting in 2015 which is the largest increase that has occurred in recent years. Non-performing loans continue to have stable trend and are well provisioned. In general we are dealing with positive developments in this sector, stressed Governor Hamza among other.
While Mr. Miniane informed the Governor for the purpose of the visit, stressing that this visit is a continuation of the program of visits within the assessment of the IMF program for Kosovo. These meetings are also held in all member states of the IMF. Mr.Miniane praised the work and performance indicators of the financial system.
At the end both sides expressed willingness to deepen cooperation between the CBK and the IMF. In addition to the team from Washington, the meeting were also attended by IMF resident representative in Kosovo Mr. Rud Wermelen.
High delegation of the International Monetary Fund Mission (IMF), led by Mr. Jacques Miniane will stay for a visit in Kosovo until April 5th, where they will meet with representatives of the Kosovo institutions.