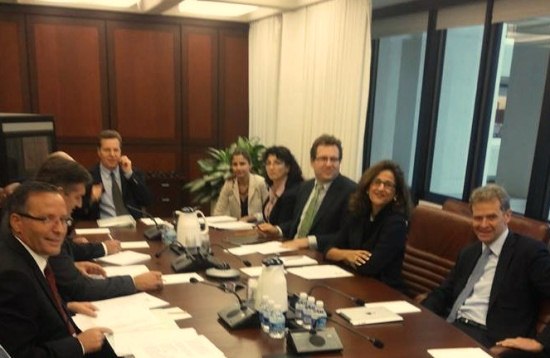 Governor of the Central Bank of Kosovo, Mr. Bedri Hamza is participating in regular annual meetings of the International Monetary Fund and the World Bank, which are taking place in Washington DC. Apart of participating in the IMF and World Bank plenary sessions, Governor Hamza has participated in the relevant constituency meetings in the IMF and World Bank, as well as met with the Executive Director for Central and Eastern Europe Constituency at the IMF, Mr. Johann Prader, with IMF Deputy Director Mrs. Nemat Shafik, with World Bank&rsquo;s Acting Vice President, Mrs. Laura Tuck as well as with U.S. Treasury Department representatives and the U.S. State Department representatives.  The Governor Hamza had also bilateral meetings with central bank governors of the region and beyond. During these meetings with relevant senior representatives and officials were evaluated positively the economic and financial sector developments in Kosovo.  During the meetings Governor Hamza received these institutions support for ongoing projects and new future projects, which will directly contribute to the further development of the financial sector in the Republic of Kosovo.