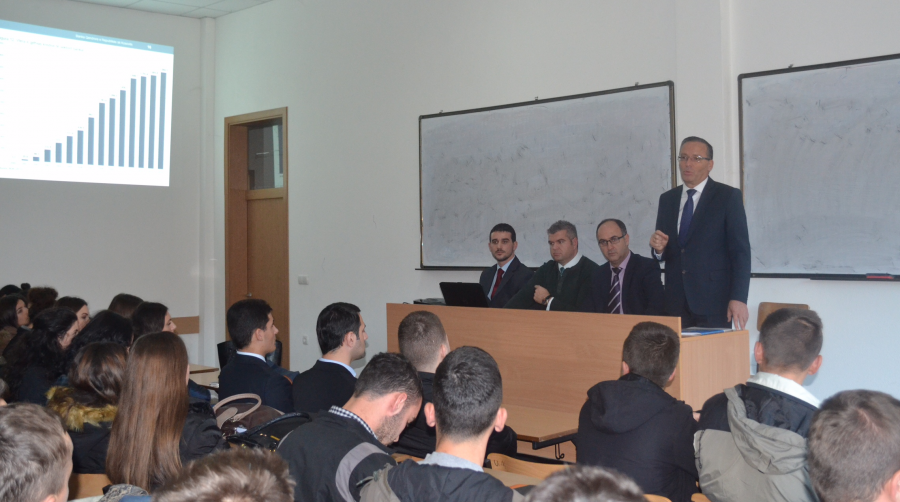 The lecture was held within the framework of Financial Education Program, a program that is being conducted under the auspices of the CBK with educational institutions at all levels in Kosovo.
The topic of the lecture held by the Governor of the Central Bank Mr. Bedri Hamza was titled "The Role and functions of the Central Bank, the banking system in Kosovo and CBK's role in maintaining financial stability in the country. He discussed issues related to the function of the CBK since its establishment until today, then explained in details as well the duties and responsibilities of the CBK under the Law of CBK and other related laws.
In the second part of the discussion the Governor presented the data and the performance of the financial system supervised by the CBK over the years. The data provided were of interest to the students due to the fact that they were getting acquainted with the details from an institution (CBK), which is directly related and mandated to supervise and control institutions licensed by itself in this case in the role of the regulator. They debated issues in the area of banking supervision, licensing, insurance supervision, securities market, pension funds, public debt etc.
In the third part of the lecture students participated in a debate initiated by the Governor for posing different questions. On this occasion the students showed great interest and actively joined in with many questions from the banking system, lending, then inquired about the role of the banking system in the economic development, economic growth, the impact of major projects in economic development etc. The Governor answering to all of the questions raised has offered full support from the CBK to all students to be active participants in the program and the mutual cooperation between the two institutions, with particular emphasis in increasing the knowledge in areas dealing with financial education, a program developed by the CBK.
The governor has expressed the readiness of him and CBK in encouraging students and lecturers of the University in the future to be part of lectures from different areas, which are in the interest of drafting curricula of relevant subjects. He also asked from professors of the University to encourage outstanding students to participate in the CBK’s competition of "Internship Program for Student", and apply for the “Prize of Young Economist” and in no way to hesitate in requiring public information from the CBK that would help students in drafting their paper works or theses.
Finally, the Vice-Rector for International Relations of this University Prof. Dr. Rifat Morina thanked the Governor for his comprehensive and useful lecture to the students wishing that such cooperation be extended and hoping that the University " Isa Boletini" will benefit from lectures and participation of students in the programs developed by the CBK with emphasis in the area of financial education.