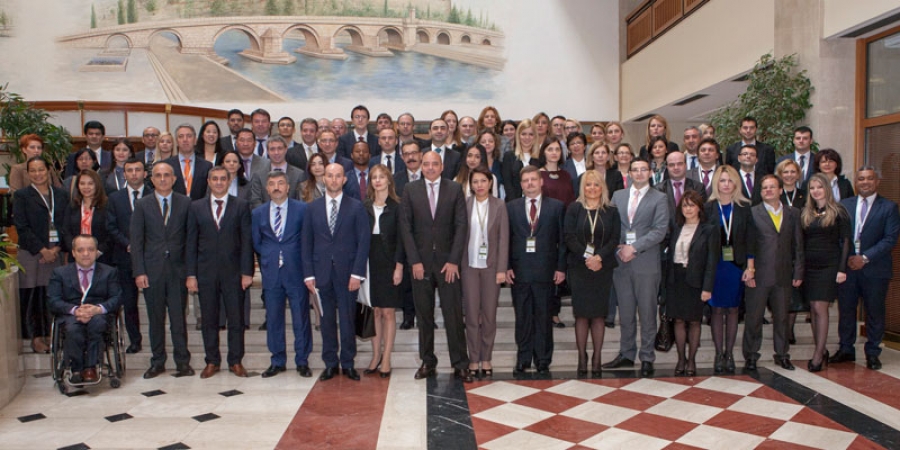 The National Bank of the Republic of Macedonia together with the Alliance for Financial Inclusion (AFI) and supported by the Federal Ministry for Economic Cooperation and Development of Germany (BMZ) and the State Secretariat for Economic Affairs of Switzerland (SECO) from 26-28 October, 2015 in Skopje, held the First Regional Forum on Financial Inclusion Policy. This conference brought together acknowledged experts from around the world that are engaged in issues of financial inclusion policy in spheres like: Consumer Protection, Financial Literacy (CPFL) and SME Finance policies, as well as digital financial services and financial inclusion data. During the 3-day Conference, in addition to a series of debates and expert committees, as well as participants’ workshops, on the second day was approved joint document known as a consensus document. At the meeting of this document approval, among the 17th high financial institutions, the Central Bank of the Republic of Kosovo was represented by the Deputy Governor, Mr. Lulzim Ismajli. Approval of this document will set the stage for potential benefit for financial inclusion of the entire region. The final document approved, was presented to the participants by the Governor of the Bank of Macedonia Mr. Dimitar Bogov, who mentioned that this document focuses on four areas of regional cooperation: consumer protection, financial literacy, digital financial services (DFS) and SME finance. Regarding the CBK inclusion in this initiative, the Deputy Governor Mr. Ismajli held a meeting with the Executive Director of the Alliance for Financial Inclusion AFI, Mr. Alfred Hannig. On that occasion Mr. Ismalji thanked for the inviting the CBK to participate in this important regional event, expressing the CBK readiness for cooperation. Whereas Mr. Hannig informed Deputy Governor on the role of Alliance for Financial Inclusion, which is one of the financial organizations that is already spread in the region and beyond, emphasizing the role of this organization as well as mutual benefit of institutions that are part of this network. During the meeting, AFI's officials handed the official invitation to Mr. Ismajli for the CBK membership in this initiative. Deputy Governor promised to Mr. Hannig and other officials that in the near future the CBK will seriously consider the invitation to join the AFI. At the closing session, it was a joint conclusion that our region has many similarities in the field of financial inclusion with respect to the financial inclusion challenges. There is a shared view that the level and quality of financial inclusion in the economies of the region have a significant impact on the prospect for sustainable growth. The financial inclusion will also provide an opportunity for further advancement that would support and facilitate greater scale and sustainability of financial stability.
Building a joint regional network would help the expand of efforts between countries of the region and AFI's member countries and would also affect the development of strategies and projects beneficial to the areas dealing with consumer protection, financial education, as well as easy access to finance of small and medium enterprises.
For more about the joint statement of a meeting held in Skopje, click: Eastern Europe and Central Asia (ECA) Regional Forum on Financial Inclusion Policy.