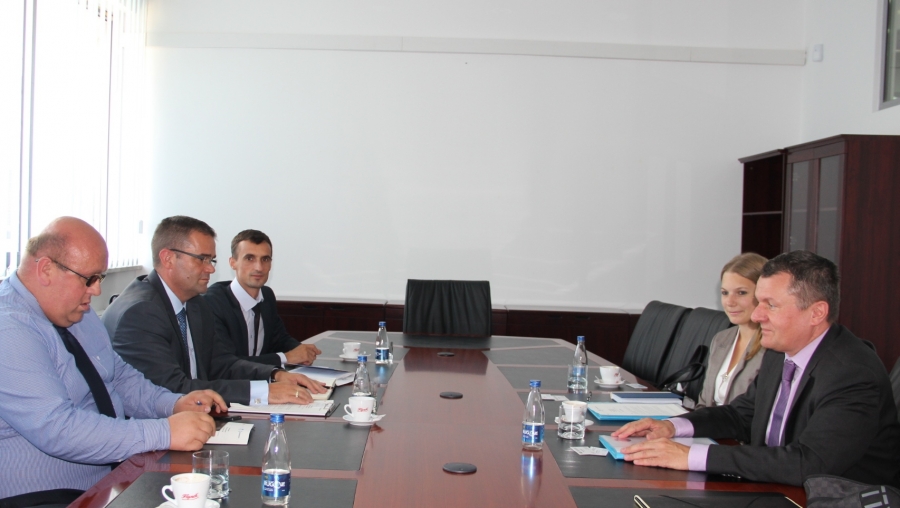 In the premises of the Central Bank of the Republic of Kosovo, the Deputy Governor for Financial Supervision, Mr. Fehmi Mehmeti accompanied by Nexhat Miftari, Director of Insurance Supervision Department and Berat Begu, hosted the meeting with the Managing Director of the Insurance and Pension Supervision of Financial Market Authority of Austria, Mr. Peter Braumüller accompanied by Mrs. Gudrun Wenth, official for International Relations and European Integration of this institution. The purpose of this visit, among others, was further deepening of cooperation between the two supervisory institutions in the field of insurance and pensions.
The Deputy Governor for Financial Supervision, Mr. Fehmi Mehmeti thanked the FMA's representatives and made a brief presentation of the financial market in general and the insurance industry in Kosovo in particular. He informed the guests from Austria that the CBK is in the process of completing the legal framework on insurance, informing the FMA's representatives on the draft Law on Insurance and the secondary legislation as well as legislation compliance with the European Union Directives. Meanwhile, guests from the FMA were informed on the financial performance of insurance companies with Austrian capital, operating in Kosovo and other CBK processes dealing with the insurance field.
In addition, they discussed possibilities for expanding cooperation with the Financial Market Authority of Austria, respectively the possibility of initiating the process of signing a Memorandum of Cooperation between the CBK and the FMA in banking, the possibility of organizing joint supervisory colleges , joint examinations, and the possibility that FMA support the CBK with its internal manuals, in order to approximate the supervision to European practices and basic principles and standards of the International Association of Insurance Supervisors.
Among others, the FMA representatives expressed their commitment in supporting the CBK in staff training, guidance on reducing of uninsured vehicles by offering Austrian experience in this regard, as well as organization of a joint meeting between the CBK and FMA’s representatives this autumn in Vienna. The FMA also committed to supporting the CBK in implementing Solvency I and in the European Integration processes.