With an ocassional ceremony, today was marked the conclusion of the technical cooperation of the European Central Bank (ECB) with the Central Bank of the Republic of Kosovo (CBK), Bank of Albania (BoA) and the National Bank of the Republic of Macedonia (NBRM). Besides the ECB, in this program, which was funded by the European Commission, were also included national central banks of the European System of Central Banks (ESCB).
The closing ceremony of the program was held in Pristina, hosted by the CBK, with the participation of Mr. Gilles Noblet, Deputy Managing Director for International and European Relations in the ECB, Mr. Libor Chlad, representative of the European Union, Mr. Bedri Hamza the CBK Governor, Mrs. Elisabeta Gjoni, first Deputy Governor of the BoA and Mr. Fadilj Bajrami, Deputy Governor of the NBRM. 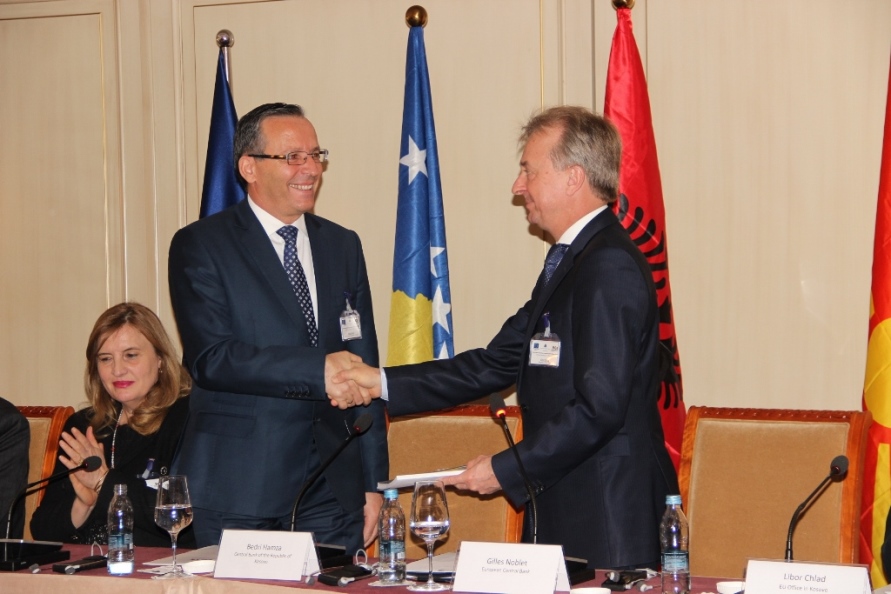 During the program were analyzed needs of three central banks in the region in terms of preparation to join the ESCB, once the respective countries have qualified for the EU membership. Completion of the program coincided with the ending of the CBK’s needs analyses period and during the closing ceremony it was formally submitted the report on analyses of the CBK needs, which contains recommendations for the development of the CBK functions in order to achieve standards and practices of EU central banks.