Central Bank of Republic of Kosovo (CBK) and USAID signed a Grant Agreement of $6.5 million to capitalize the Kosovo Credit Guarantee Fund (KCGF)

The Governor of Central Bank of Republic of Kosovo Mr. Bedri Hamza and USAID Head of Mission Mr. James Hope signed an Agreement to provide a grant of $6.5 million to be used by the CBK for capitalization of a newly established Kosovo Credit Guarantee Fund (KCGF). This grant provides KCGF with the necessary financial means to begin issuing credit guarantees to financial institutions, under the oversight of the Central Bank of Kosovo.
Establishment of the KGCF was enabled by joint efforts of Government of Kosovo and USAID, and supported by Central Bank of Republic of Kosovo. The purpose of KCGF is to increase access to finance for Small and Medium Enterprises leading to increased local production, job creations, and broaden and deepen financial intermediation. 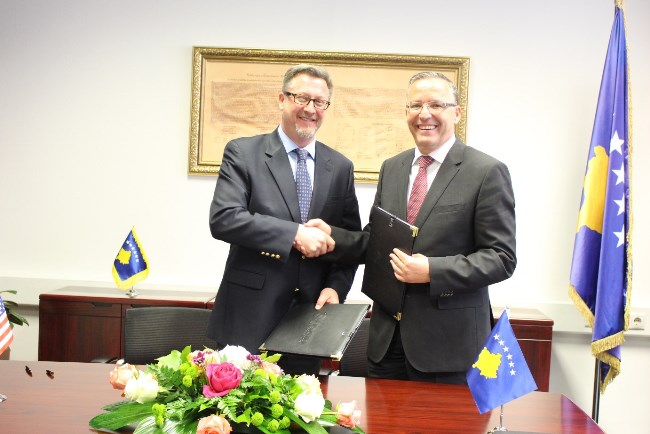 Governor Hamza expressed his appreciation for all the efforts that USAID and Empower Credit Support Project team have devoted to establish legal and institutional framework to operationalize the KCGF. He indicated further that KCGF marks an important development towards further intermediation and deepening of the financial sector in Kosovo. This new development will help channel banking liquidity into private sector development and accelerate economic growth in Kosovo. Central Bank of Republic of Kosovo remains committed to support KCGF functioning as mandated by Law.
On the other hand, Mr. Hope USAID Head of Mission thanked the Governor for continued CBK support to transform the project into a fully pledged financial institution-KCGF. Mr. Hope highlighted the critical importance that access to finance has for the development of the private sector in Kosovo and the role of the Financial Institutions in facilitating the proper amounts and types of finance that SMEs’ need for both short-term working capital and long-term investment. Without proper financing, businesses, entrepreneurs, farmers, etc., cannot grow, export and employ more people.
Signing of the grant agreement marks an important milestone to further strengthen the cooperation between the two Institutions. While USAID remains a strong supporter of many developmental projects in Kosovo, both Institutions remain committed to continue their cooperation for the initiatives and projects that contribute to economic growth and development of Kosovo.