The new series of banknotes

In order to ensure a smooth transition and for logistical reasons, the Bank of Germany and the Bank of Austria will continue to issue this denomination until 26 April 2019.

As all other denominations of euro banknotes (first series), the denomination in the amount of 500€ will always maintain its value and can be exchanged at a national central bank of the euro area at any time.

Bank (ECB) has unveiled the full design of banknotes (Europa series) of 100€ and 200€ denominations that will put into circulation on 28th of May 2019. 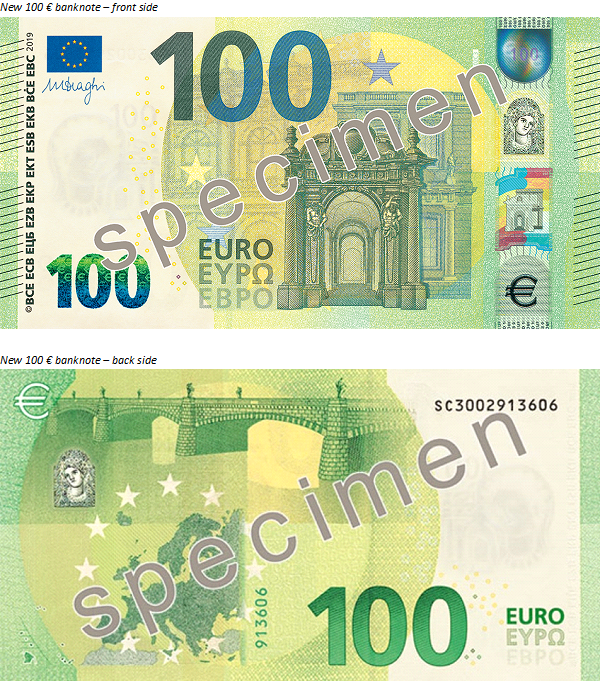 After the €5, €10, €20 and €50, the €100 and €200 new series banknotes are the last two denominations marking the completion of the circle of issuance of new banknotes since in 4th of May 2016 ECB decided to terminate the production and issuance in circulation of the 500 € banknote. However, the first series 500 € banknote remains a legal tender, and shall forever retain its value. 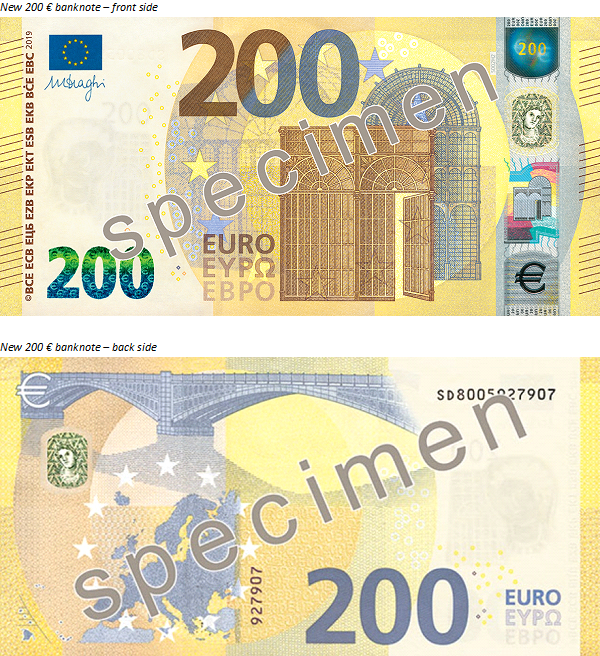 The new €100 and €200 banknotes make use of new and innovative security features. Just like the other denominations, the new 100 € and 200€ notes are easy to check when using the “FEEL, LOOK and TILT” method.

The new €100 and €200 notes are a different size compared to the old €100 and €200 notes. Both denominations of 100€ and 200€ are now the same height as the €50 banknote. However, their length remains unchanged – the longer the note, the higher the value. Since the €50, €100 and €200 banknotes are now the same height, they can be more easily handled and processed by processing machines. They will also fit better in people’s wallets and last longer, as they will be subject to less wear and tear

In addition to the security features that can be seen with the naked eye, euro banknotes also contain machine-readable security features. On the new €100 and €200 banknotes these features have been enhanced, and new ones have been added to enable the notes to be processed and authenticated swiftly. The second series of banknotes will provide increased protection against counterfeiting. This makes euro banknotes even more secure, but also easier to check and handle 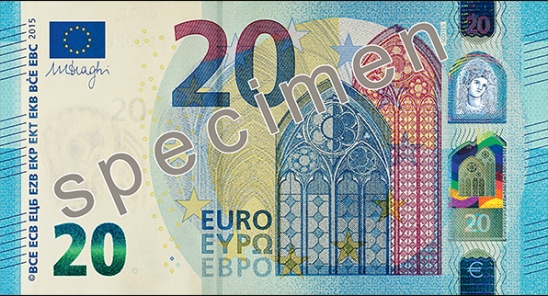 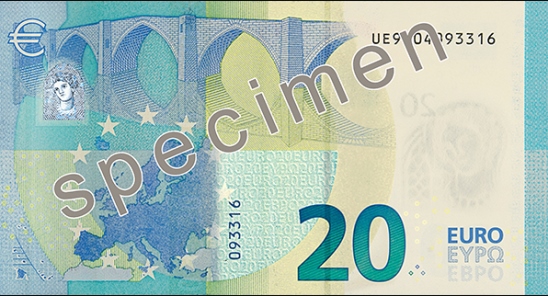 For more information about security features of the new € 20 banknote please refer to the official website   http://www.new-euro-banknotes.eu/Euro-Banknotes/Euro-banknotes-7-3/THE-NEW-20.
On the May 13, 2014 the European Central Bank (ECB) unveiled the complete design of the new €10 banknote at the ECB’s event in Frankfurt am Main, Germany.
The new €10 note is the second in the Europa series and like the first series of €5 the new €10 banknote has a new design and contains an additional innovative security feature.
New €10 banknote was issued in circulation on September 23, 2014 in the Eurozone. 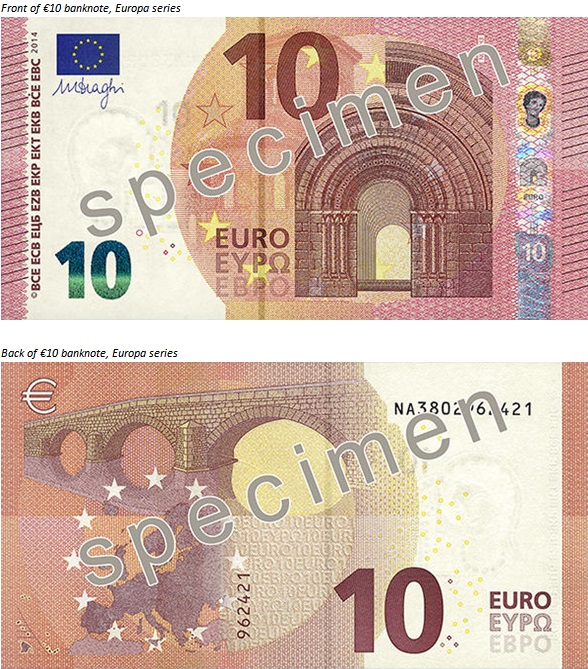 For more information about security features of the new   € 10 banknote please refer to the official website   http://www.new-euro-banknotes.eu/Euro-Banknotes/Euro-banknotes-7-2/THE-NEW-€10

Over 10 years after the introduction of euro banknotes and coins, the Eurosystem, in 2013 has started to issue the second series of euro banknotes, known as the Europa series. It includes a portrait of Europa, a figure from Greek mythology and the origin of the name of our continent.

The new €5 banknote entered circulation on May 2, 2013 and was slightly modified to accommodate and incorporate advanced security features.

On January10, 2013 the European Central Bank (ECB), unveiled the new €5 banknote at an event at the Archaeological Museum in Frankfurt am Main.  Comparing to first series of €5 banknote, new Europa series contains an additional innovative security feature. 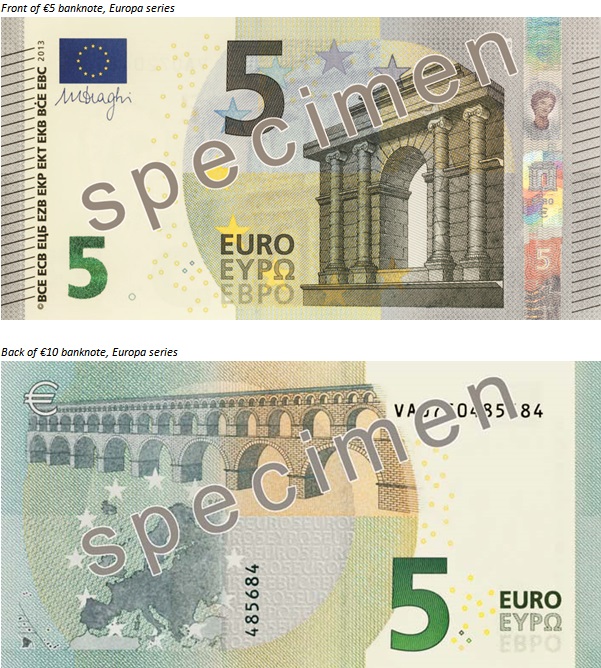 For more information about security features of the new currency in the amount of the € 5 banknote please refer to the official website http://www.new-euro-banknotes.eu/Euro-banknotes/Security-features/FEEL/THE-NEW-5

The second series of banknotes 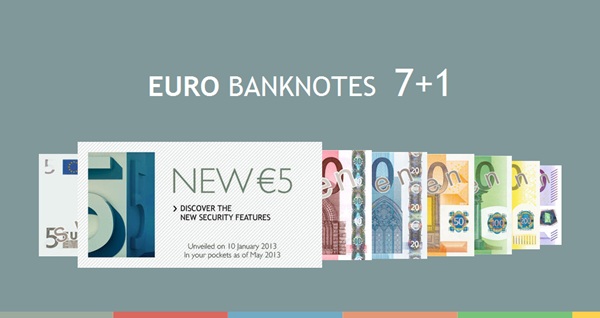 On November 8, 2012 Mario Draghi, president of the European Central Bank (ECB) announced the introduction of the second series of euro banknotes, called “Europa”. The first note of the new series to be released into circulation across the euro area on May 2013 was the €5 banknote.

November 8, 2012: ECB announces the introduction of a new series of euro banknotes, starting with the€ 5 note, and revealing three security features of this banknote.

As with the first series of euro banknotes, the Europa series is easy to check using the “FEEL, Look and TILT” method. No tools are necessary “Feel” feature of the new 5 € banknote was revealed on January 10, 2013 along with its full design.

On November 8, 2012 the ECB has released three security features easily to be detected on the new € 5 banknotes, as shown below.

Portrait watermark
Look at the banknote against the light. A faint image showing the value of the banknote, a window and a portrait of Europa becomes visible.

Look at the banknote against the light. The security silver thread appears as a dark stripe and the value of the banknote can be seen in tiny white lettering, a portrait of Europa and a window also appear.

Tilt the banknote. On the new banknote, the shiny number in the bottom left corner displays an effect of the light that moves up and down. The number also changes colour from emerald green to deep blue.

Launching the Europa series
Europa Series
The new euro banknotes are called the Europa series because some of their security features contain a portrait of Europa, a figure from Greek mythology and the origin of the name of our continent.
Denominations remain unchanged

The new euro banknotes are to be introduced gradually over several years, in ascending order and starting with the new €5 banknote. The denominations remain unchanged: €5, €10, €20, €50, €100, €200 and €500.
Issuance time
The exact timing of the issuance of the other denominations will be determined and announced to the public and cash handlers at a later stage
Banknote equipment manufacturers
Banknote equipment manufacturers have been involved in the development of the Europa series to allow them to prepare for the introduction of the new banknotes.
Enhanced security features
The new series includes new and enhanced security features which will offer better protection against counterfeiting.
Design Evolution
The new euro banknotes present an evolution but they still feature the “AGES AND STYLES” design of the first series and use the same dominant colours, but have been slightly modified to accommodate the enhanced security features. This also makes them to be easy distinguished from the first series.

Design for visually impaired users
As with the first series of euro banknotes, visually impaired users were consulted during the design phase of the second series, and their requirements were included in the final designs.
The €5 banknote will be launched first
The €5 banknote is the first denomination of the Europa series to be launched. As it is one of the denominations most heavily exposed to wear and tear, its durability has been improved by applying a coating.
Parallel circulation of old and new banknotes
In order to use up remaining stocks, the €5 banknotes of the first series will be issued for several months alongside the new €5 banknotes. In any case, for each denomination both series will continue to circulate in parallel as legal tender.