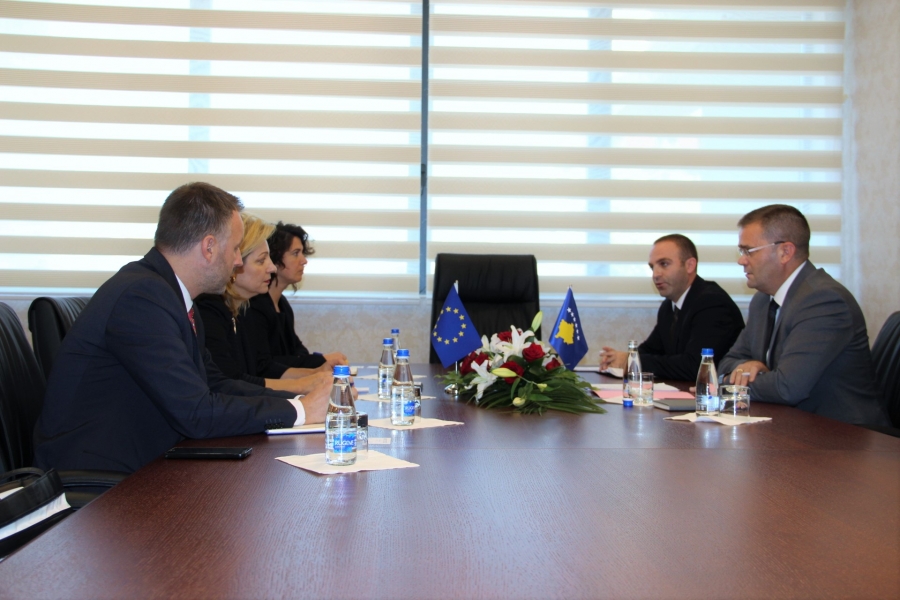 Mr. Mehmeti initially thanked Ms. Apostolova for the ongoing support of the European Union Office in Prishtina to our institutions regarding all spheres. We are aware that the development of the financial sector remains one of the key preconditions for sustainable economic development of the country, stated Mr. Mehmeti
The role of the Central Bank of the Republic of Kosovo is a very important given its constitutional mandate for regulation, supervision and development of a sound and stable financial market. The CBK has consistently undertaken measures to regulate and strengthen the financial sector in order to boost the economic development of the country, said among others Acting Governor, Mr. Mehmeti.
Mr. Mehmeti added that the CBK, in addition to maintaining macro-fiscal stability and regulation of the financial sector is committed to progress in meeting the criteria for European integration, with particular focus on the obligations arising under the Stabilization and Association Agreement. In this regard, we are grateful to you and European Union taxpayers for the assistance and support you have provided, through funding of various projects and expert assistance in order to build local capacities for improving rule of law and developing of democracy.
During the meeting it was also discussed about the Euro-integration processes of the CBK and the financial sector in general where an important role in this regard has the signing of the Memorandum of Understanding with the European Banking Authority (EBA), the purpose of which is to create a framework for cooperation and information exchange between the EBA and the Central Bank of the Republic of Kosovo.
Improving the legal infrastructure and empowering the rule of law in the country was also one of the topics of this meeting, being considered as one of the basic preconditions for the development and integration of a sound market based on a free market economy and fair competition, and regarding this the European Union has contributed a lot. A special emphasis was given to the assistance and support for the adoption of many important laws such as the law on insurance, the law on prevention of money laundering and terrorist financing etc. The CBK's role in the rule of law and combating the informal economy was also appraised.
At the end, Mrs. Apostolova expressed her satisfaction regarding positive developments achieved in the financial sector especially during recent years in Kosovo.
She also highlighted that the European Union Office in Kosovo will continue its cooperation and will support the Central Bank of the Republic of Kosovo in various areas through financial mechanisms that facilitate advancement of its functions.