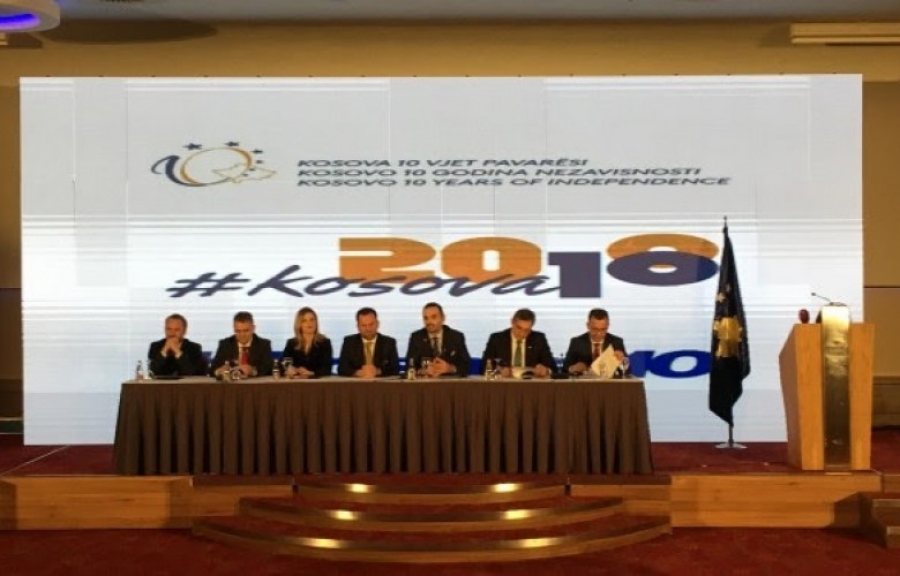 On the eve of the 10th Anniversary of the Declaration of Independence of Kosovo, the Acting Governor of the Central Bank of the Republic of Kosovo Mr. Fehmi Mehmeti attended the Economic Forum "The 10th Anniversary of Economic Independence of Kosovo", organized by the Kosovo Chamber of Commerce, attended by the President of the Republic of Kosovo Mr. Hashim Thaci and the government cabinet ministers.
As part of the panel, Acting Governor Mehmeti, in his statement, among other things, mentioned the country's financial system as one of the most important pillars of the country's economic journey during the period of ten years, which developed into a sector that is effectively providing the economy with modern financial services and at the same time has become a very important source of overall macroeconomic stability of the country.
The Acting Governor said that the Kosovo banking sector of Kosovo which at the time of declaring the independence of the country had started to accelerate the pace of lending growth, during these 10 years turned into one of the main sources of financing of the domestic economy, resisting even the most unfavorable circumstances during the global crisis. Apart from being characterized by steady growth, banking lending continuously improved the financing conditions for businesses and households, thus strengthening its role in financing the country's economic development, highlighting the substantial decline interest rates on loans to 6.8 percent, which have now fallen to the regional average level, thus promoting the demand for loans and enabling the realization of many investment projects that could not happen without financing by banks.
The Acting Governor underlined also the fact that Kosovo has made significant progress in the field of access to finance, which is confirmed by the World Bank's Doing Business Report, where the criterion of access to finance lists Kosovo among the most advanced countries in the world.
In addition to contributing to the financing of economic activity, the banking sector represents a very important pillar to the overall macroeconomic stability of the country due to the indicators that rank Kosovo among the countries with the most stable banking sectors. In this case, was mentioned only the non-performing loans indicator of 3.1 percent, which suffices to show the soundness of the Kosovo banking sector.
Despite the positive developments that our economy has marked over the first decade of the country's independence, we are aware that there is still much to be done to boost economic development and improve the well-being of our citizens. Unemployment and trade deficit continue to represent very important challenges for our economy, which requires to work more intensively and jointly to address them.
At the conclusion of its discussion, the Acting Governor stressed that during the first decade as an independent state, Kosovo has managed to prove that it has an economy capable of generating growth and macroeconomic stability, but there are still significant challenges ahead for further development of Kosovo, and in order to achieve this we are required to continue with even greater intensity. While issues related to statehood have dominated the first 10 years as an independent state, it is now time to focus more on topics that lead to further economic growth. The Central Bank of the Republic of Kosovo has built modern capacities and is ready to face all the challenges within its scope, in order to support the country's economic development. For more governor's discussion.